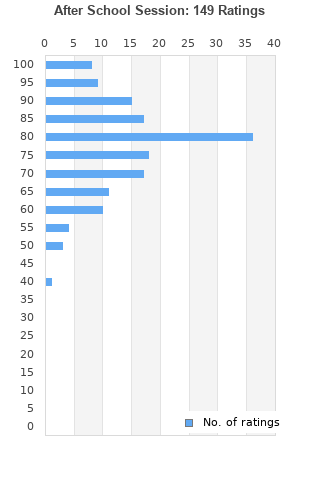 After School Session is ranked 2nd best out of 43 albums by Chuck Berry on BestEverAlbums.com.

The best album by Chuck Berry is Chuck Berry Is On Top which is ranked number 595 in the list of all-time albums with a total rank score of 3,130. 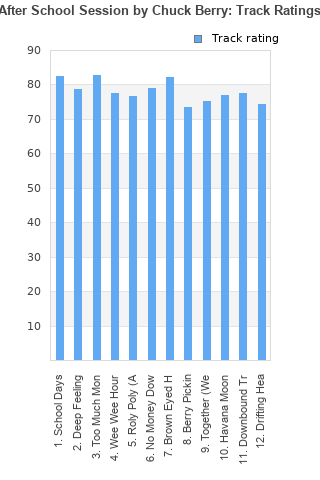 Rating metrics: Outliers can be removed when calculating a mean average to dampen the effects of ratings outside the normal distribution. This figure is provided as the trimmed mean. A high standard deviation can be legitimate, but can sometimes indicate 'gaming' is occurring. Consider a simplified example* of an item receiving ratings of 100, 50, & 0. The mean average rating would be 50. However, ratings of 55, 50 & 45 could also result in the same average. The second average might be more trusted because there is more consensus around a particular rating (a lower deviation).
(*In practice, some albums can have several thousand ratings)
This album is rated in the top 4% of all albums on BestEverAlbums.com. This album has a Bayesian average rating of 77.6/100, a mean average of 77.7/100, and a trimmed mean (excluding outliers) of 77.9/100. The standard deviation for this album is 12.1.

A pretty good, but not necessarily great album.

Chuck Berry's debut LP on Chess records released in May, 1957.
I'm reviewing the 2004 reissue that also contains three bonus tracks of "You Can't Catch Me", "Thirty Days (To Come Back Home)", and "Maybellene".

A good album with some classic hits that unfortunately is weighted down with some average songs.

This album defined how rock N' roll riffs and solos would look like from ten years and so on, It is a remarkable stand point on 50s guitar music, and Chuck is the first guitar god from Rock History.

Too Much Monkey Business is a great track as well...

This record has Downbound Train on it, one of Chuck's coolest pieces of work. Roly Poly and Deep Feeling are two more favourites. The hits you can get anywhere but it's good to hear them more or less in context.

Your feedback for After School Session