'Round About Midnight (studio album) by Miles Davis 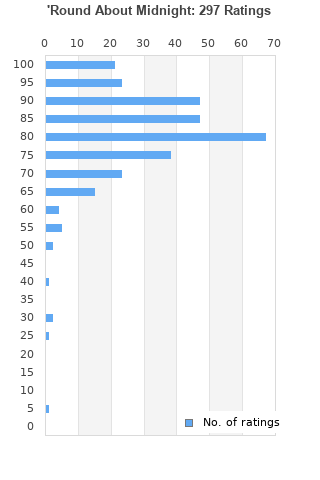 'Round About Midnight is ranked 7th best out of 114 albums by Miles Davis on BestEverAlbums.com.

The best album by Miles Davis is Kind Of Blue which is ranked number 38 in the list of all-time albums with a total rank score of 28,013. 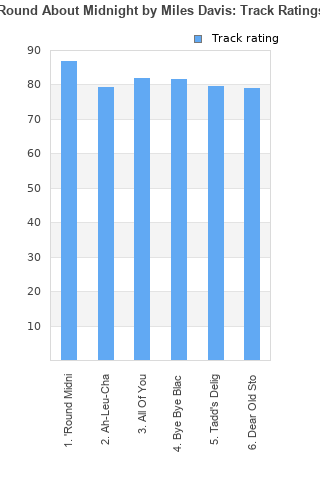 'Round About Midnight rankings

'Round About Midnight collection

'Round About Midnight ratings

Rating metrics: Outliers can be removed when calculating a mean average to dampen the effects of ratings outside the normal distribution. This figure is provided as the trimmed mean. A high standard deviation can be legitimate, but can sometimes indicate 'gaming' is occurring. Consider a simplified example* of an item receiving ratings of 100, 50, & 0. The mean average rating would be 50. However, ratings of 55, 50 & 45 could also result in the same average. The second average might be more trusted because there is more consensus around a particular rating (a lower deviation).
(*In practice, some albums can have several thousand ratings)
This album is rated in the top 1% of all albums on BestEverAlbums.com. This album has a Bayesian average rating of 81.8/100, a mean average of 81.1/100, and a trimmed mean (excluding outliers) of 82.1/100. The standard deviation for this album is 12.8.

'Round About Midnight favourites

'Round About Midnight comments

This is no very unorthodox album and not very revolutionary. The band is top-notch as usual, with all the great jazz names being in fine form. YOu cannot fail with these guys!

Imagine being so incredible that this is in the conversation for Miles' third best album of the decade.

Excellent jazz playing throughout, and incredibly melodic. Love it.

One of the best of early Miles. Good compositions well delivered, especially by the back line.

While solid Jazz, I didn't get an eargasm from it.

'Round About Midnight was the first album by Davis on Columbia, where he would stay for 30 years. It features saxophonist John Coltrane, who had not yet become an icon. The interplay between the two here is great, with Davis' melodies being answered by Coltrane's energetic solos. The rhythm section of Red Garland, Paul Chambers and Philly Joe Jones never wavers.

A true jazz classic. One of many Davis albums that are necessary for anyone who's a fan. A beautiful piece of work.

Your feedback for 'Round About Midnight