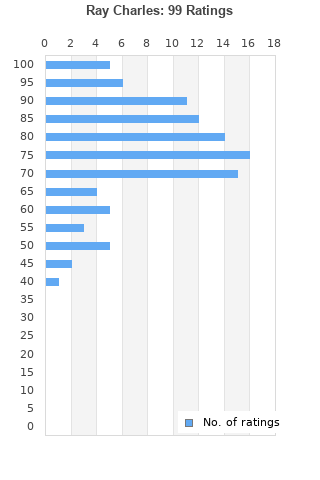 Ray Charles is ranked 3rd best out of 53 albums by Ray Charles on BestEverAlbums.com.

The best album by Ray Charles is Modern Sounds In Country And Western Music which is ranked number 1166 in the list of all-time albums with a total rank score of 1,557. 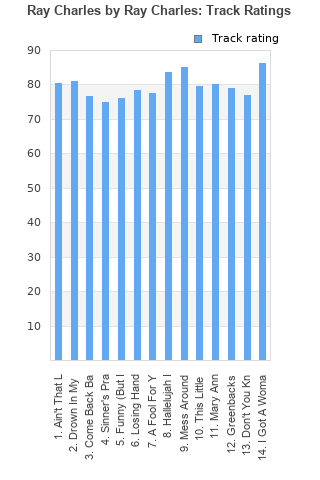 Rating metrics: Outliers can be removed when calculating a mean average to dampen the effects of ratings outside the normal distribution. This figure is provided as the trimmed mean. A high standard deviation can be legitimate, but can sometimes indicate 'gaming' is occurring. Consider a simplified example* of an item receiving ratings of 100, 50, & 0. The mean average rating would be 50. However, ratings of 55, 50 & 45 could also result in the same average. The second average might be more trusted because there is more consensus around a particular rating (a lower deviation).
(*In practice, some albums can have several thousand ratings)
This album is rated in the top 6% of all albums on BestEverAlbums.com. This album has a Bayesian average rating of 76.4/100, a mean average of 76.7/100, and a trimmed mean (excluding outliers) of 76.7/100. The standard deviation for this album is 13.5.

Here it started: where the whole band moves as one, where short licks make all the difference, where voices explore their own limits, where it wasn't about what but about how. It's soul. It sparked the "I'm so sad" soul of James Brown (before he invented funk) and the "life is so hard" soul of Otis Redding, but it's always heart-warming to go back to Ray Charles's "I love you so much" soul that is always deep down a bit happy under all the tears.

The King of Slow... and I mean that as a compliment. Anyone that's a musician knows that slow tempos are actually harder, and he's the master.

Plus he can rock... easily one of the best musicians to walk the earth. His voice and soul...

Ain't that love, Mess Around, This Little Girl of Mine, I've Got A Woman...Solid.

Ray Charles was genius, and this album was remarkable.

Listen up! He doin' the Mess Around. Turns out he was Genius right from the start. All killer no filler. Remarkable for a non-jazz 50s album.

Your feedback for Ray Charles