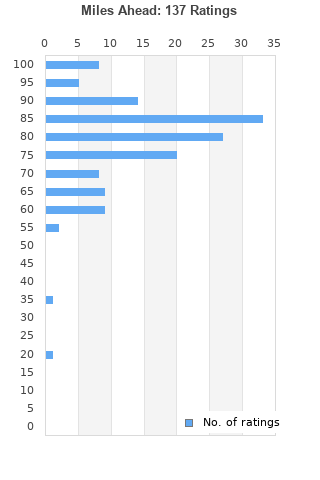 Miles Ahead Orchestra directed by Gil Evans - Miles Davis +19 CBS 62496
Condition: Used
Time left: 1d 23h 28m 25s
Ships to: Worldwide
£9.99
Go to store
Product prices and availability are accurate as of the date indicated and are subject to change. Any price and availability information displayed on the linked website at the time of purchase will apply to the purchase of this product.  See full search results on eBay 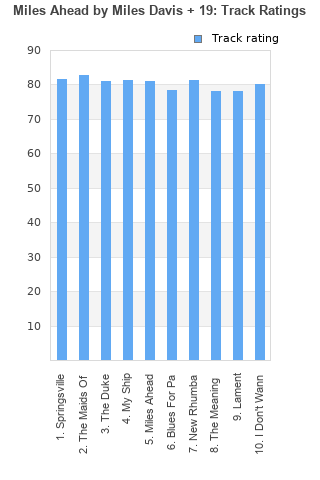 Rating metrics: Outliers can be removed when calculating a mean average to dampen the effects of ratings outside the normal distribution. This figure is provided as the trimmed mean. A high standard deviation can be legitimate, but can sometimes indicate 'gaming' is occurring. Consider a simplified example* of an item receiving ratings of 100, 50, & 0. The mean average rating would be 50. However, ratings of 55, 50 & 45 could also result in the same average. The second average might be more trusted because there is more consensus around a particular rating (a lower deviation).
(*In practice, some albums can have several thousand ratings)
This album is rated in the top 2% of all albums on BestEverAlbums.com. This album has a Bayesian average rating of 79.6/100, a mean average of 79.3/100, and a trimmed mean (excluding outliers) of 80.1/100. The standard deviation for this album is 12.4.

As far as I can tell, this is Miles Davis's first foray into Third Stream and it is great. The way each piece blends together is magnificent. And Davis blows it out of the water with his playing, as he always does. I also love the little bits of cool jazz that are thrown in there. Makes for a really pleasant listening experience. Think Birth of the Cool mixed with Sketches of Spain and you've got this album, even though it's more than that. This is actually up there for me as one of my favorite Miles Davis records. Really really enjoyed this album.

His phrasing is amazing, his skill is unsurpassed.

The first of the Gil Evans collaborations. Years ago, I would get baked during baseball's playoffs and watch the games with the sound off and Miles Ahead playing. It was uncanny how many times the ebb and flow of the game matched the music.

Or maybe it was just the weed.

Your feedback for Miles Ahead