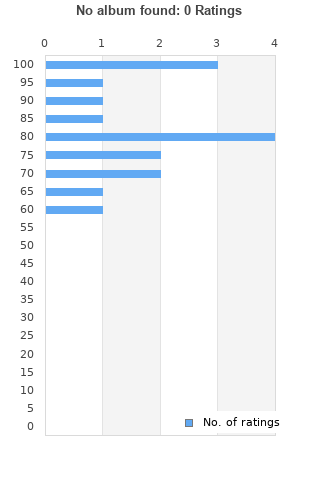 PROCOL HARUM LIVE & DA CAMERA SINGERS. - VINYL ALB. VG + SP 4335
Condition: Used
Time left: 26m
Ships to: Worldwide
$7.99
Go to store
Product prices and availability are accurate as of the date indicated and are subject to change. Any price and availability information displayed on the linked website at the time of purchase will apply to the purchase of this product.  See full search results on eBay

The best album by Procol Harum is A Salty Dog which is ranked number 1539 in the list of all-time albums with a total rank score of 1,134.

Rating metrics: Outliers can be removed when calculating a mean average to dampen the effects of ratings outside the normal distribution. This figure is provided as the trimmed mean. A high standard deviation can be legitimate, but can sometimes indicate 'gaming' is occurring. Consider a simplified example* of an item receiving ratings of 100, 50, & 0. The mean average rating would be 50. However, ratings of 55, 50 & 45 could also result in the same average. The second average might be more trusted because there is more consensus around a particular rating (a lower deviation).
(*In practice, some albums can have several thousand ratings)
This album is rated in the top 3% of all albums on BestEverAlbums.com. This album has a Bayesian average rating of 78.4/100, a mean average of 78.0/100, and a trimmed mean (excluding outliers) of 78.8/100. The standard deviation for this album is 12.8.

Interesting but lacking in feeling for me.

An all time favourite. I would list the best tracks, but 7 of the songs on here are near perfect and can't really be ordered, so I'll just mention the 3 that aren't nearly perfect.

Firstly is 'Mable', a charming little ditty that I really do like a lot, just not as much as 7 of the other tracks on here.

Secondly, 'Good Captain Clack', like 'Mable', short and inoffensive, but not half as good as 'Mable'. Still quite a good song though.

Finally is 'Something Following Me', which is, again, still good, just not as good as it's siblings.

Crap production, but great record. Extremely underrated, probably because it doesn't include, Whiter shade of a pale, or/and, Homburg. The songs on the album aren't quite as amazing as those two tracks but it's a fine record, a wonderful snapshot of psychedelic Britain.

Better track listing is Wikipedia's listing of US version, which includes all all of my favorite tracks:"A Whiter Shade of Pale", "Conquistador", "Repent Walpurgis", and "Cerdes" is a close contender. The rest is ok.
https://en.wikipedia.org/wiki/Procol_Harum_(album)#US_version

An underrated album all the tracks are really good. Great lyrics and music. Procol Harum weren't just one trick ponies with a Whiter Shade.

Procol Harum's 1967 album is easily among the greatest debut-albums ever released. In fact, it could be the greatest.

In a highly original way Procol Harum succeeded in combining raw rhythm'n blues with classical music. With Keith Reid's dark mysterious lyrics and Brooker's soulful voice these 1967 recordings sound as attractive and relevant as ever. Their sound is quite unique, and it's hard to mistake these early Procol Harum recordings from any other band's output.

Some versions contain all tracks from both the American 11 tracks version and the European 10 tracks release. Actually several tracklistings of the album were released, but the the most important difference was whether they contained "Homburg" or "A Whiter Shade of Pale". Some versions also miss "Good Captain Clack".

Other bonus-tracks are the B-side to "A Whiter Shade of Pale", ""Lime Street Blues", a great R&B track.

Early versions of songs later to appear on their second album "Shine on Brightly" have also been included. All great and highly interesting. The original version "Magdalene" has only survived from an acetate, so the sound obviously is not as good as could hoped for. Otherwise all tracks sound great.

It's very hard to bring forward tracks from the original album, as they all in different ways are of the highest quality. Obviously their to early hit-singles stand out, but in the same vein you'll find outstanding songs like "Salad Days" and "Repent Walpurgis". The bluesier side of the band is shown on tracks like "Something Following Me" and "Cerdes", but even these two have the classical "PH" feel to them. Among the up-beat tracks "Conquistador" and "Kaleidoscope" are the closest you get straight-forward rock-music. "Mabel" and "Good Captain Clack" are Procol Harum at their most unceremonious. An incredibly strong album.

You're right, don't know why I wrote that

this IS the american version ffudnebbuh. on the british version Good captain Clack is track 9. and it has no Whiter Shade Of Pale.

I didn't know that...I only had the single, "Whiter shade of Pale", so I don't know what was on the original album. Although, this is the British version, is the american version different?

Your feedback for Procol Harum