Relationship Of Command (studio album) by At The Drive-In

Relationship Of Command by At The Drive-In
Year: 2000
Overall rank: 487th 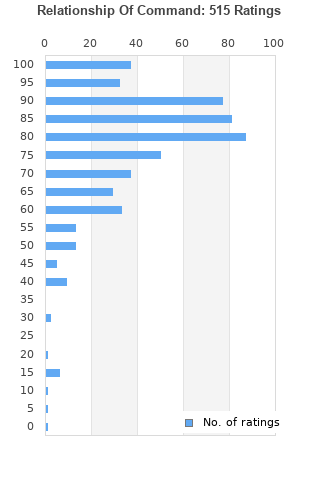 Relationship of Command by At the Drive-In (CD, Sep-2000, Virgin). NM!
Condition: Like New
Time left: 9h 30m 56s
Ships to: Worldwide
$14.99
Go to store
Product prices and availability are accurate as of the date indicated and are subject to change. Any price and availability information displayed on the linked website at the time of purchase will apply to the purchase of this product.  See full search results on eBay

Relationship Of Command is ranked as the best album by At The Drive-In. 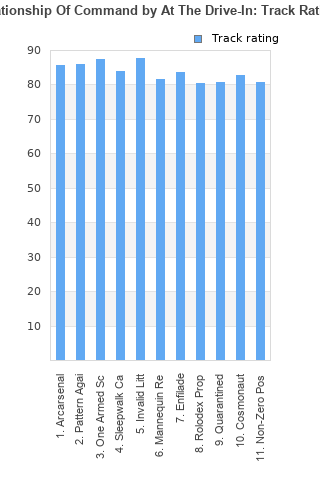 Rating metrics: Outliers can be removed when calculating a mean average to dampen the effects of ratings outside the normal distribution. This figure is provided as the trimmed mean. A high standard deviation can be legitimate, but can sometimes indicate 'gaming' is occurring. Consider a simplified example* of an item receiving ratings of 100, 50, & 0. The mean average rating would be 50. However, ratings of 55, 50 & 45 could also result in the same average. The second average might be more trusted because there is more consensus around a particular rating (a lower deviation).
(*In practice, some albums can have several thousand ratings)
This album is rated in the top 3% of all albums on BestEverAlbums.com. This album has a Bayesian average rating of 78.5/100, a mean average of 77.1/100, and a trimmed mean (excluding outliers) of 78.7/100. The standard deviation for this album is 17.1.

Fantastic album do yourself a favour and have a listen

Amazing. I can't recomend this album enough. I probably like In/Casino/Out more, but this one is still practically perfect. This is probably my favorite album of the 00's.

One of my favorite Post-Hardcore albums and one of my all time faves. Its hard for me to choose a fav ATDI album (El Gran Orgo, In/Casino/Out, Vaya and this are all absolutely amazing.) but this album may take the cake. While In/Casino/Out is more consistant and listenable this album is way more rewarding.

The post-hardcore can be one of my favorite sub-genres (along with 90s boom bap and alt. metal) if it has what a great phx album has, and in my opinion this album features all of the things I look for in a phx album that can be found in my other phx favorites. It has brilliant ideas excecuted perfectly (a quality from Source Tags & Codes/The shape of punk to come), sprawling song structures (Yank crime, The moon is a dead world), emotion (The Devil and God are Raging Inside Me, Illusion of safety), personality (Worship and tribute), catchyness and energy (In/Casino/Out).

Arcarsenal is also possibly the best opening track ever.

First five tracks are so fucking intense. It sounds like it was heavily influenced by grunge bands, except Pearl Jam.

this clearly influenced the hell out of linkin park

Your feedback for Relationship Of Command