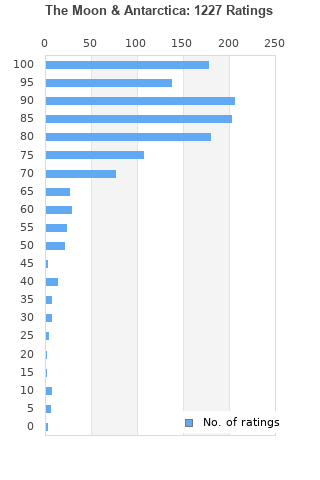 The Moon and Antarctica CD by Modest Mouse. (Nirvana, Built to Spill, Radiohead)
Condition: Very Good
Time left: 1d 13h 30m 29s
Ships to: Worldwide
$7.50
Go to store
Product prices and availability are accurate as of the date indicated and are subject to change. Any price and availability information displayed on the linked website at the time of purchase will apply to the purchase of this product.  See full search results on eBay

The Moon & Antarctica is ranked as the best album by Modest Mouse. 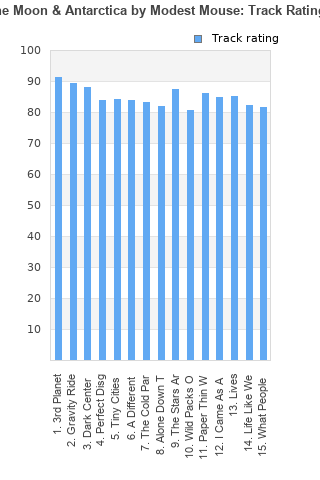 Rating metrics: Outliers can be removed when calculating a mean average to dampen the effects of ratings outside the normal distribution. This figure is provided as the trimmed mean. A high standard deviation can be legitimate, but can sometimes indicate 'gaming' is occurring. Consider a simplified example* of an item receiving ratings of 100, 50, & 0. The mean average rating would be 50. However, ratings of 55, 50 & 45 could also result in the same average. The second average might be more trusted because there is more consensus around a particular rating (a lower deviation).
(*In practice, some albums can have several thousand ratings)
This album is rated in the top 1% of all albums on BestEverAlbums.com. This album has a Bayesian average rating of 83.7/100, a mean average of 82.4/100, and a trimmed mean (excluding outliers) of 83.8/100. The standard deviation for this album is 16.2.

Quite a difficult choice between this one or The Lonesome Crowded West as their crown achievement. It's like Pixies trying to do a Pink Floyd album. Already picked it up at first listen.

Fav. Tracks: 3rd Planet, Dark Center Of The Universe, The Cold Part, Alone Down There, The Stars Are Projectors, Life Like Weeds.

Slows down a bit near the end, other than that a great album. Eric Judy sounds so good on this

Over a decade since I first heard this thing, I'm still growling along.

I think I don't give this album as much credit as it deserves (and I still give it a LOT); I think that's solely because I got into it during a really strange time in my life where I was clinging to things that weren't good for me. The second half of this record is so heavy and bleak for me in places I can still really feel it, somehow it still stings and reminds me of a lot of darkness that I experienced. But isn't that the mark of truly effective music?

It's also one of the greatest opening songs on a record I've ever heard.

Your feedback for The Moon & Antarctica