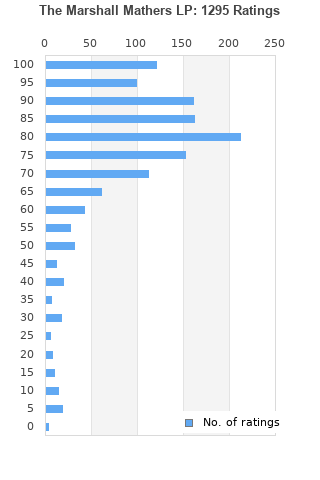 The Marshall Mathers LP is ranked as the best album by Eminem. 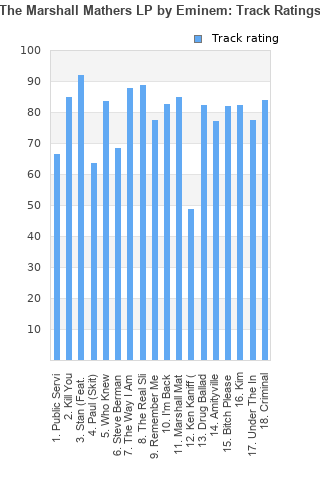 Rating metrics: Outliers can be removed when calculating a mean average to dampen the effects of ratings outside the normal distribution. This figure is provided as the trimmed mean. A high standard deviation can be legitimate, but can sometimes indicate 'gaming' is occurring. Consider a simplified example* of an item receiving ratings of 100, 50, & 0. The mean average rating would be 50. However, ratings of 55, 50 & 45 could also result in the same average. The second average might be more trusted because there is more consensus around a particular rating (a lower deviation).
(*In practice, some albums can have several thousand ratings)
This album is rated in the top 3% of all albums on BestEverAlbums.com. This album has a Bayesian average rating of 78.4/100, a mean average of 76.0/100, and a trimmed mean (excluding outliers) of 78.4/100. The standard deviation for this album is 20.3.

The album does have some great tracks that explore very important themes and are very intelligent. It also flows exceptionally well and some of the wordplay and lyric delivery is brilliant. However, there is a huge problem with this album and that is the uneducated comments and themes about certain topics. While the hate that is portrayed may not represent the artists actual views, it is made out to be a humorous topic or something to be taken lightly which it isn't. Eminem is also very influential and lyrics like this will definitely influence some people into thinking comments like this are okay and so the argument that the lyrics are just for shock factor doesn't run with me. Furthermore, I think the album is way too bloated and has too many filler tracks and not enough big hitters. The skits are pretty pointless in my opinion as well. Overall, the album has its moments where it is outstanding but the problems outweigh these moments for me.

Really don't care for Eminem in general, but this album is great.

I feel so guilty when I listen to this album, and I'm so conflicted on how to rate it. If I didn't speak the English language, I think I'd really enjoy it. But the consistent themes of sexual violence, homophobia, and generally being anti everything simply for shock factor is impossible to overlook. Eminem references multiple times (particularly on Who Knew and Criminal) how it's the listener's own fault if they interpret his lyrics as being reflected of his personality, but then sandwiches it between homophobic slurs and threats of r*pe. It's one thing to separate the art from the artist, which I find I can generally do, but when the art itself is as unapologetically wrongful as The Marshall Mathers LP, the art & the artist become fused together and it cannot be ignored. So, on flow, energy & passion: 8/10. On content: 2/10.

An important album for hip hop, and what made Eminem the biggest star of the century.
gets a lot of hate, but it's really good.

The album that made the world take white rappers seriously.

Very good album, with a lot of eminem style storytelling. Some songs didn't really have anything to add, except that he didn't care. Under the influence in peticular, had lines where they were just talking nonsense. I liked the sound though.

Hardcore - hip hop - horrorcore
The boy knows how to deliver and often witty and comical despite some of the content. Not afraid to pop at himself or his fans. Always with machine gun delivery and sound tunes

One of the darkest, funniest and most genius hip hop albums.

Your feedback for The Marshall Mathers LP