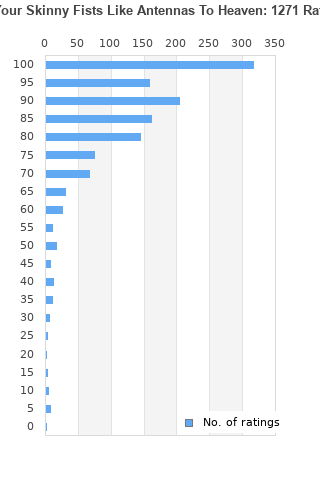 Godspeed You Black Emperor! Lift Your Skinny Fists Like Antennas to Heaven 2xLP
Condition: New
Time left: 7h 12m 39s
Ships to: Worldwide
$34.98
Go to store
Product prices and availability are accurate as of the date indicated and are subject to change. Any price and availability information displayed on the linked website at the time of purchase will apply to the purchase of this product.  See full search results on eBay

Lift Yr. Skinny Fists Like Antennas To Heaven is ranked as the best album by Godspeed You! Black Emperor. 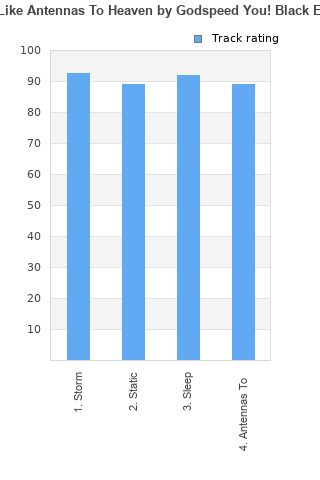 The tracks on this album have an average rating of 91 out of 100 (all tracks have been rated).

Rating metrics: Outliers can be removed when calculating a mean average to dampen the effects of ratings outside the normal distribution. This figure is provided as the trimmed mean. A high standard deviation can be legitimate, but can sometimes indicate 'gaming' is occurring. Consider a simplified example* of an item receiving ratings of 100, 50, & 0. The mean average rating would be 50. However, ratings of 55, 50 & 45 could also result in the same average. The second average might be more trusted because there is more consensus around a particular rating (a lower deviation).
(*In practice, some albums can have several thousand ratings)
This album is rated in the top 1% of all albums on BestEverAlbums.com. This album has a Bayesian average rating of 86.1/100, a mean average of 84.8/100, and a trimmed mean (excluding outliers) of 86.2/100. The standard deviation for this album is 16.7.

Probably the first time I cried to an instrumental. One piano note can give away so much emotions than a complex classical composition. Post-rock is a medicine for my soul.

ALL SONGS ARE MY FAV. TRACKS!

I must say I get a bit tired with postrock with the long noodling because they inevitably reach their chaotic but cathartic ending. But this album by this band is a bit different. Although it also has only four tracks which each take about 20 minutes, already that first track offers a variety of different segments which are all very interesting. The same can't be said for the other tracks: ex the second one has a fairly long and boring beginning ending with an interesting middle section and the last one is nearly completely uninteresting. But somehow this album presents some kind of unity although the last track should maybe have been deleted to present a more concise album.

More an experience than an album. Fantastic. One of the best opening tracks ever.

incredible album. peaks and valleys, beauty and distortion. doesn't get any better

What can I say about this album a little bit because it is blowing you away. I think the best words for this record are what for me Led Zeppelin IV is this album here is immortal, invincible and eternal all 3 points together what me gives the „AHA“ moment is the explosion on Antennas To Heaven the best track of all the song here you can here the genius of Erfrim Menuck very impressive and this album bring so much emotions you can’t name them all but a few are fear, happiness and joy and the feeling of surprise. I can say this album is very recommended and this statement is still understated. Everyone you know very good should hear to this maybe only for one try and he should give this album a chance I would say he would be surprised like I was on other Albums like Dark Side Of The Moon or Led Zeppelin 4 and Sgt. Pepper this album is one of the greatest ever made play in a high league.

These days, it's hard to quantify what qualifies for a musical experience. The medium is far more effortless to acquire and therefore more digestible. Long gone are the days of purchasing a vinyl record and making a memory out of that process. I am, by no means, a relic of an older, simpler time (despite my pension to purchase countless vinyl pressings). However, I can attest to the communal nature of said activity. Knowing that you have sunk hard earned money into what is essentially a whim or a headed recommendation. There's always inherent risk. Perhaps more interesting, is the communal, even baptismal encounters that arise from listening to an album. A transfiguration of either heart, mind or soul or, if you're lucky, all three simultaneously. Lift Your Skinny Fists Like Antennas to Heaven is nearly an hour and a half long, consisting of just four tracks that clock in at almost 20 minutes each. It's not digestible, convenient or immediate. It is however, baptismal in the sense that after fighting against its raging waters of spiraling downfall, you emerge altered. It tells us so much without a single lyric by being relentlessly reflective, critical and emotionally arresting. It's a story of epic, struggle, triumph and rebirth with no words.

Godspeed You! Black Emperor begins their definitive LP with Storm which appropriately begins as a soft flutter of forming clouds represented by gentile piano and horns. The track then glows with shimmering strings before crashing in with an extensive drum march. It evolves into a kaleidoscopic frenzy of what seems like improvisation before recoiling back into a reserved simmer, giving you time to absorb the grandeur of the previous movement. Don't ponder too long because Storm angers into a tornado fury on the second half of the 22 minute cut. It's powered by bruising drum hits and shrieking guitar that finally relent into a grocery store sample (of all things) before exiting with a sullen, reverbed piano outro. Second track, Static, is less cyclonic but arguably many shades darker. It begins with a drone that wouldn't be out of place on an ambient record before swelling into a sermon delivered by a zealot with strings that can be only described as "weeping". She prophesizes, "Because when you see the face of God, you will die, and there will be nothing left of you, except the God-man, the God-woman, the heavenly man, the heavenly woman, the heavenly child." It's hard to tell if the sample's inclusion is critical of excessive religious fervor or regretful due to a neglect of faith. Perhaps both are fitting. The track then heats to a boil of post-rock rage as guitar and drum motifs, similar to those on Storm, bat the track around with vigor. Static ends with a return to an ambient, metallic hiss not foreign to a horror film soundtrack of the early 2000's.

The third track of the record stands as the valedictorian of the bunch. Sleep starts with a vocal sample credited to Murray Ostril. It typifies the notion, that which impresses our elders holds no significance to this generation. A perpetual trend that is engrained in the human psyche. He mentions Coney Island as if it were the Las Vegas of the East Coast. A rose-colored sentiment of his youth no doubt but this testimony reiterates a baptismal experience of his own, experiencing Coney Island as a child without the collective shrugged shoulders of future generations. He laments, "They called Coney Island the playground of the world. There was no place like it, in the whole world, like Coney Island when I was a youngster. No place in the world like it, and it was so fabulous. Now it's shrunk down to almost nothing, you see." The track swoons with a whirring wail which harnesses into a driving drum locomotive which then quiets minutes later. Sleep then morphs into a twinkling, meditative passage that prioritizes Sophie Trudeau's violin and the drumming twosome of Aidan Girt and Bruce Cawdron. It's the first song on the LP that doesn't end in enveloping quiet but, instead, follows the lead of the percussive duo to lead the track out. Finally, Antennas to Heaven rounds out the album with what can be described as a snippet of bluegrass kicking off the track. Glimmering, child-like piano drifts into a sample of conversing French children before Antennas begins in earnest. It's without hesitation the most thematically positive of the lot, with the first major movement embodying the musical equivalent of the promise of a better future. Antennas then lies in wait for a short period, revisiting the utilization of melancholic piano strikes before familiar, clean drum hits join the fray. It forms a rising tide in the final quest for uplift both spiritually and in musical timbre. It doesn't last forever as the track concludes with icy, anxious noise that challenges any claim that the incorporeal conclusion was a positive one.

Canada's Godspeed You! Black Emperor are no strangers to long-form artistic statements. Their last album effort was 1997's F#A#∞, an album that put them among gloomy, eclectic music's elite. Still, Lift Your Skinny Fists Like Antennas to Heaven transmits a higher emotional resonance. The music carries in such a way that makes you resign to the idea that it could not be created by anyone else at any other time. This is achieved by sometimes appearing to be improvisational within each of the movements during mammoth tracks, while coinciding with such a technical proficiency that is fine tuned to the note. This gives the album a human unpredictability and allows for surprise each and every time it's listened to. Many could gander at the tracklisting and harbor perceptions of ostentation, however, the album is entrenched in humility with only the sonic prowess perpetuating flair. The humility comes from a place of vulnerability, fallibility and a sense of regret. All of these themes are communicated through wordless, harmonious odysseys that are concurrently nostalgic and worrisome of what the future will hold. Lift Your Skinny Fists Like Antennas to Heaven is a four track triumph of sound and vision that could suffice as a lifetime of work for some artists. It's a clam that harbors a pearl of experience that radiates a different kind of beauty for each and every listener. One that revisits you each and every time you revisit the album.

"And we used to sleep on the beach here,
sleep overnight.
They don't do that anymore.
Things changed...
You see,
They don't sleep anymore on the beach."

Definitively the best album to study to. The fact that I listened to it while not being 100% concentrated may have impaired my listening experience. Still, this is a great album.

Your feedback for Lift Yr. Skinny Fists Like Antennas To Heaven