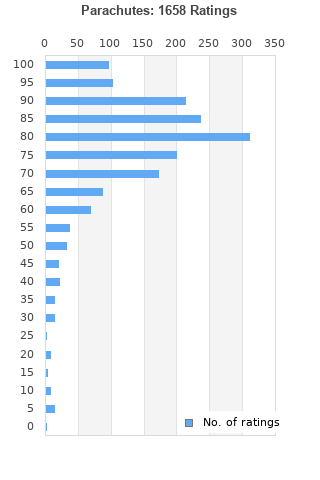 Parachutes is ranked 2nd best out of 19 albums by Coldplay on BestEverAlbums.com.

The best album by Coldplay is A Rush Of Blood To The Head which is ranked number 100 in the list of all-time albums with a total rank score of 15,050. 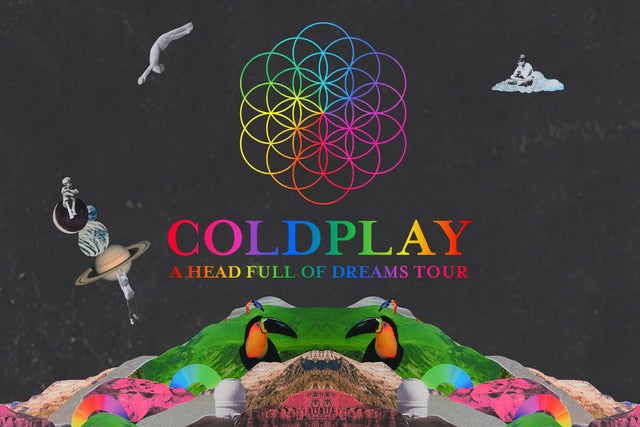 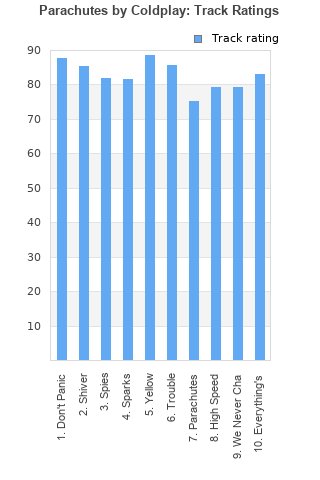 Rating metrics: Outliers can be removed when calculating a mean average to dampen the effects of ratings outside the normal distribution. This figure is provided as the trimmed mean. A high standard deviation can be legitimate, but can sometimes indicate 'gaming' is occurring. Consider a simplified example* of an item receiving ratings of 100, 50, & 0. The mean average rating would be 50. However, ratings of 55, 50 & 45 could also result in the same average. The second average might be more trusted because there is more consensus around a particular rating (a lower deviation).
(*In practice, some albums can have several thousand ratings)
This album is rated in the top 3% of all albums on BestEverAlbums.com. This album has a Bayesian average rating of 77.8/100, a mean average of 76.3/100, and a trimmed mean (excluding outliers) of 77.8/100. The standard deviation for this album is 17.2.

Beautiful album, not quite on the level of A Rush Of Blood To The Head but still very strong. My highlights are Don't Panic, Spies and Shiver. Trouble and Yellow are also nice though overplayed. Weakest tracks are We Never Change and Everything's Not Lost.

Beautiful album. A Rush of Blood to the Head is an improvement, but this is still well worth a listen.

Such a sweet little album with it's fair share of great tunes, never pushes any boundaries but most of the songs have a surprising amount of emotional depth and it's a very good debut album by anyones standards. Coldplay really showed so much promise her, it's a shame they never built on this as much as they could've.

The best Coldplay album it all went downhill from here.

Your feedback for Parachutes