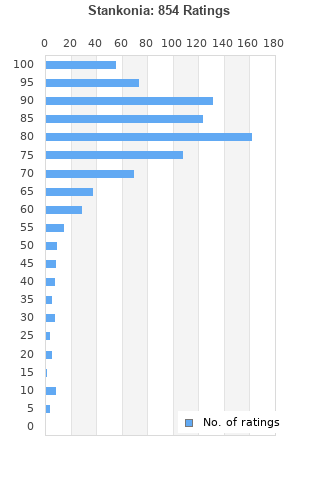 Stankonia is ranked 2nd best out of 7 albums by OutKast on BestEverAlbums.com.

The best album by OutKast is Aquemini which is ranked number 274 in the list of all-time albums with a total rank score of 6,972. 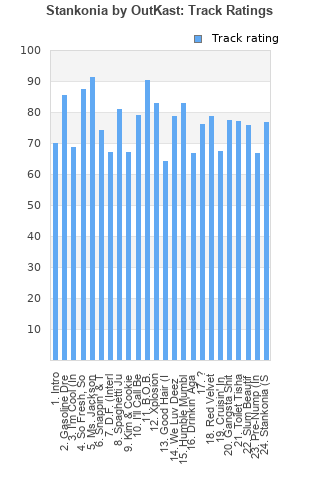 Rating metrics: Outliers can be removed when calculating a mean average to dampen the effects of ratings outside the normal distribution. This figure is provided as the trimmed mean. A high standard deviation can be legitimate, but can sometimes indicate 'gaming' is occurring. Consider a simplified example* of an item receiving ratings of 100, 50, & 0. The mean average rating would be 50. However, ratings of 55, 50 & 45 could also result in the same average. The second average might be more trusted because there is more consensus around a particular rating (a lower deviation).
(*In practice, some albums can have several thousand ratings)
This album is rated in the top 2% of all albums on BestEverAlbums.com. This album has a Bayesian average rating of 79.9/100, a mean average of 78.4/100, and a trimmed mean (excluding outliers) of 80.0/100. The standard deviation for this album is 16.7.

I understand that this came after ATLiens and Aquemini, meaning that the expectations were sky-high, but I wouldn't expect them to release anything better than that. Shockingly enough, this is my favorite OutKast album. If the rest of their discography was exactly as it is and this album was missing, I would definitely rank them one level lower than I do now. Some of the main criticisms are consistency and length. The former does hold some - or even a lot - true. The lows could very well be their lowest so far. On the other hand, the highs have a strong case for being their highest - or at the very least pretty close to it. When you listen to the album as a whole, I find that the highs easily overshadow the lows. The length argument is one I don't get - unless you combine it with the incosistency argument, but it doesn't add anything new to the discussion, I can't see what difference it would make if it were shorter but still inconsistent. Hip hop albums in general do have a tendency for being on the longer end of the spectrum, not to mention that, after all, it's shorter than Aquemini. The production makes the album what it is. It manages to be challenging/experimental, but also poppy/catchy at the same time, it offers something to everyone. Lyrics and rapping - while by no means bad or anything, I mean how could they possibly be- do take a step back to allow the majestic sound to shine brighter. Many highlights to choose from, I'm gonna avoid the super obvious ones and go with Humble Mumble("Life is like a great big roller coaster Everything in life don't always happen like it's supposed to Trials and tribulations make you stronger, live longer You wanna reach the nation nigga start from ya corner Everything don't always happen like you plan it Demand it; over stand it then you handle it Fuck wishing, you missing the ambition on your mission Now you switchin' Why you quittin' cause it's heated in the kitchen?").
To sum it up, I get its flaws, but they are excused because of its good -actually great- parts.

Favorite rap album of all time. I'm kind of ignorant to the genre, so that doesn't say much, but I love it!!!

Take out the singles, and the first half of this is the most average stuff the group had done up to this point. But the second half is great.

Everything I've ever wanted in a hip hop record. Production is fantastic, great balance of rapping and singing, and the big hits are so much fun to listen to and never get old. Stankonia is OutKast's best, in my opinion. I don't understand why some people seem to think this album's second half isn't good. I'll be damned if Humble Mumble, Gangsta Shit, and Stankonia (Stanklove) aren't terrific songs.

My favourite Outkast album. This album truly defined a new era of Hip Hop in the 21st Century since it was released in 2000. It's truly a classic album.

Their first three were all pretty consistent albums I rated 8,8, and 8.5 respectively. However, this one its like they forgot to cut out the weaker tracks. An album with such great tracks in the first half has no reason to lag so much towards the end. Would have challenged Aquemini as their best but they made the album about twice as long as it needed to be by adding all the filler tracks in the album. Still, this album features much of their best songs and some of the catchiest tunes hip-hop has to offer.

Starts off so strong, the rest can't keep up.

Your feedback for Stankonia