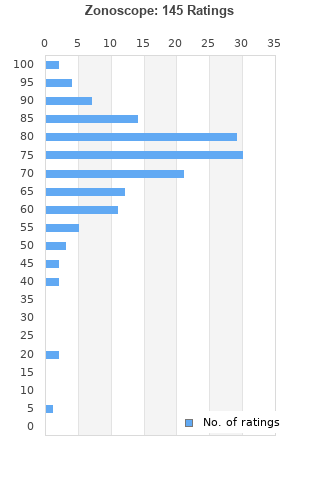 Zonoscope is ranked 2nd best out of 6 albums by Cut Copy on BestEverAlbums.com.

The best album by Cut Copy is In Ghost Colours which is ranked number 2364 in the list of all-time albums with a total rank score of 677.

The Collection
The Bronze Peacock at House of Blue, Houston, United States. 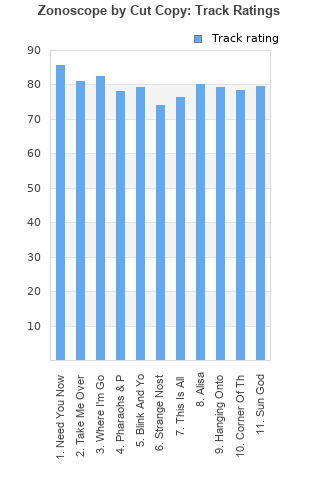 Rating metrics: Outliers can be removed when calculating a mean average to dampen the effects of ratings outside the normal distribution. This figure is provided as the trimmed mean. A high standard deviation can be legitimate, but can sometimes indicate 'gaming' is occurring. Consider a simplified example* of an item receiving ratings of 100, 50, & 0. The mean average rating would be 50. However, ratings of 55, 50 & 45 could also result in the same average. The second average might be more trusted because there is more consensus around a particular rating (a lower deviation).
(*In practice, some albums can have several thousand ratings)
This album has a Bayesian average rating of 73.8/100, a mean average of 72.7/100, and a trimmed mean (excluding outliers) of 73.9/100. The standard deviation for this album is 14.1.

First three tracks are legitimately the best start to any electronic album I've ever heard. Rest is mediocre.

Some of their material makes them seem like LCD Soundsystem or Hot Chip wannabes, but there are moments where they shine through on here with some moments of divine originality and legitimately interesting music.

A warm and poppy album that is always pleasant but with a few hiccups here or there.

Unequal album. Some strong songs (Need You Know, Where I'm Going, Blink And You'll Miss...) and some weak songs (Pharaon & Pyramids, Strange Nostalgia For The Future, This Is All We've Got)

I love Hot Chip so I can't realy dislike this album...

Nice music in the style of the eighties. Unfortunately the end of the album is weak.

I hear a lot of early 90s techno, a la psychosonic, in "zonoscope", more a broadly coherent statement than their last album. It'll be a difficult task deciding whether this is better than "in ghost colors" or not.

Everything sounds the same.

Your feedback for Zonoscope