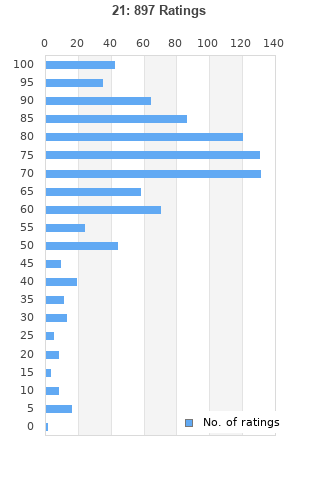 21 is ranked as the best album by Adele. 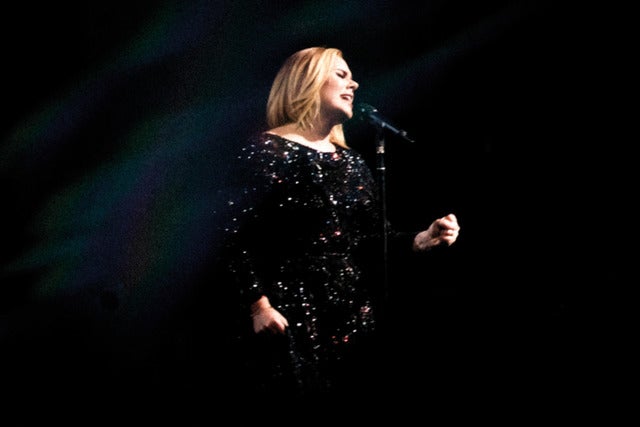 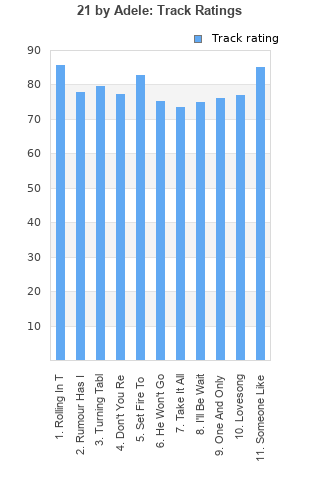 Rating metrics: Outliers can be removed when calculating a mean average to dampen the effects of ratings outside the normal distribution. This figure is provided as the trimmed mean. A high standard deviation can be legitimate, but can sometimes indicate 'gaming' is occurring. Consider a simplified example* of an item receiving ratings of 100, 50, & 0. The mean average rating would be 50. However, ratings of 55, 50 & 45 could also result in the same average. The second average might be more trusted because there is more consensus around a particular rating (a lower deviation).
(*In practice, some albums can have several thousand ratings)
This album has a Bayesian average rating of 72.1/100, a mean average of 70.2/100, and a trimmed mean (excluding outliers) of 72.1/100. The standard deviation for this album is 19.8.

I. Rumour Has It
II. Someone Like You
III. Rolling in the Deep
IV. Set Fire to the Rain
V. Take It All

The Adele juggernaut rolls on… Very unfair to judge an artist by their popularity, especially when that artist has such a strong voice and songwriting credentials. Maintains its momentum throughout and we should even be lenient on her Cure cover.
Rating: Great
Best track: Rolling In The Deep

Her best album, but some of the tracks are barely listenable. Overall, 65/100.

A little slow overall, but elevated by some top-notch tracks.

THE emotional pop album of the century.

Good album, but after awhile it gets boring.

A complete change of pace but I just love her vocals and the tunes are excellent as well - good enough to forgive her for going on about that ex boyfriend in nearly every song!
Someone Like You is absolutely beautiful, whilst other top tracks include the infectious Rumour Has It, Rolling In The Deep and Set Fire To The Sun

I have to say I thoroughly bored by the whole affair. Nothing against Adele or what she's going for here, but I don't get the hype. She has a technically good voice sure, but it doesn't do much for me, she's also a technically good songwriter but the songs do similarly little. People saying this is better than usual pop music are missing something, it's a bit like comparing plain cheap vanilla ice cream and Haagen Dazs. Sure Haagen Dazs is slightly tastier, but it's just ice cream. Adele is the same, she's better than Katy Perry or Kesha sure, but she is just making top 40 pop music.

I've listened to this album again (2019) and it is a great pop album I wouldn't call it "soul" music but she has a great soulful voice. Most of the tracks hit the mark except Lovesong & I'll Be Waiting. On the positive side is the amazing Set Fire To The Rain & Rolling In The Deep I also like Turning Tables. I hope her new material has a more RnB feel to it.

Had to suffer this daily when I worked in HMV. Have to admit, she is a master of her craft. The one plus point for me is the sheer royalties Lol Tolhurst gets out of this - he didn't even contribute a single note on the original version of Lovesong.