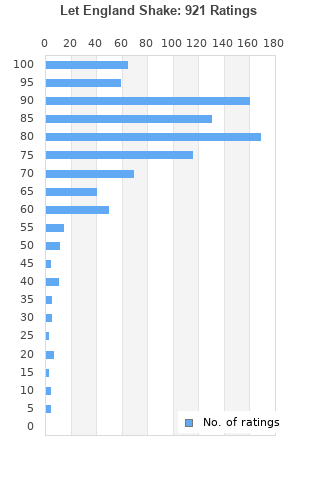 Let England Shake is ranked as the best album by PJ Harvey. 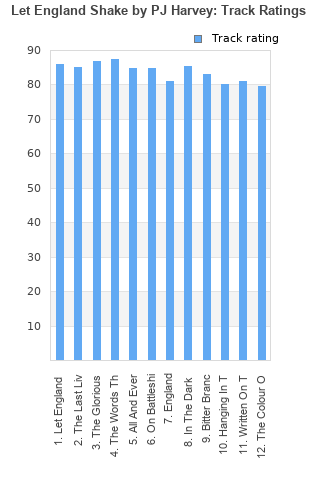 Rating metrics: Outliers can be removed when calculating a mean average to dampen the effects of ratings outside the normal distribution. This figure is provided as the trimmed mean. A high standard deviation can be legitimate, but can sometimes indicate 'gaming' is occurring. Consider a simplified example* of an item receiving ratings of 100, 50, & 0. The mean average rating would be 50. However, ratings of 55, 50 & 45 could also result in the same average. The second average might be more trusted because there is more consensus around a particular rating (a lower deviation).
(*In practice, some albums can have several thousand ratings)
This album is rated in the top 2% of all albums on BestEverAlbums.com. This album has a Bayesian average rating of 80.2/100, a mean average of 78.6/100, and a trimmed mean (excluding outliers) of 80.3/100. The standard deviation for this album is 16.1.

FIRST LISTEN: Personal and quite original, I expected an off-putting experience. but I was wrong. Requires more spins.

Lyrically interesting, but musically a bit basic for my taste. Also very out of place to be making an anti-war album about WWI in 2011. This doesn't seem to be saying very much new.

Only recently heard this as a follow up to Stories - which I liked but was not blown away with to be honest. This album I find far superior and makes me more likely to listen to more of her stuff. Lots of great stuff on here.

This album trumps the superb 'Stories From The City . . .' which is no mean feat

Polly Jean began this project by writing the words and lyrics first then slowly built the music and melody around the narrative and boy does it show with each song a literary masterpiece focusing on War , a love letter to England ala 'Village Green' on the one hand and detracting on the other

Polly trades in her trusty Telecaster for an auto-harp and sings a haunting set of songs about war seen from a feminine perspective.

Unique and quite brilliant in my opinion.

Your feedback for Let England Shake