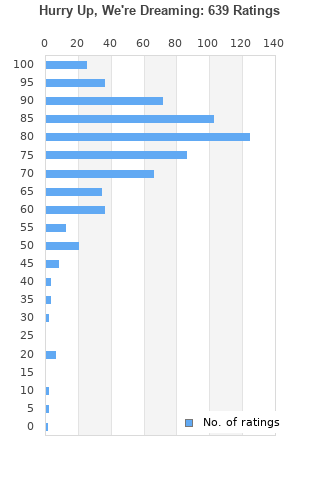 Hurry Up, We're Dreaming is ranked as the best album by M83. 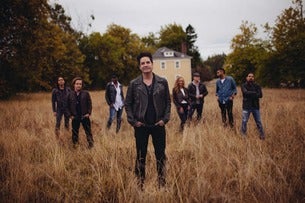 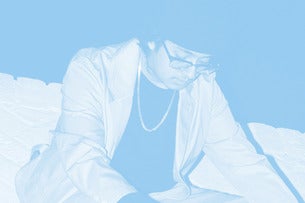 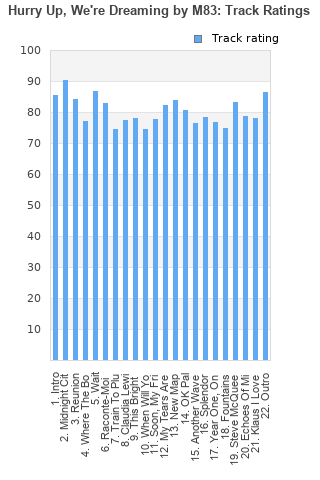 Rating metrics: Outliers can be removed when calculating a mean average to dampen the effects of ratings outside the normal distribution. This figure is provided as the trimmed mean. A high standard deviation can be legitimate, but can sometimes indicate 'gaming' is occurring. Consider a simplified example* of an item receiving ratings of 100, 50, & 0. The mean average rating would be 50. However, ratings of 55, 50 & 45 could also result in the same average. The second average might be more trusted because there is more consensus around a particular rating (a lower deviation).
(*In practice, some albums can have several thousand ratings)
This album is rated in the top 4% of all albums on BestEverAlbums.com. This album has a Bayesian average rating of 77.4/100, a mean average of 76.2/100, and a trimmed mean (excluding outliers) of 77.5/100. The standard deviation for this album is 15.7.

This album is too long and doesn't have the substance to fill that run time. It struggles with all the genres it is trying to bring together with most songs sounding a bit messy or they lack anything to draw us back to that track. The album could be trimmed down as well with a lot of the 22 tracks being filler tracks and not really providing much for the record. However, on some songs they get the formula perfectly and they create some phenomenal songs that really carry the album. You also have to give them a lot of credit for their experimentation as the record is extremely unique and different. Overall, the record is just a little bit forgettable and I see no real reason to come back to the album as I would just listen to the songs I enjoy on their own.

Every song is either too ambient to be super interesting or it sounds like a knock off Midnight City. But it's not bad, either.

I didn't know what I was gonna get with this album. US radio (and several local sports ads) pumped "Midnight City" through the airwaves ad nauseum, so I figured this was a one-hit wonder esoteric sort of band. I'm happy to say that my preconceived notions were shattered after having listened to this album! It flows so well from one song to another and has some great sonic textures that you would expect from the best dream pop bands out there. They feel like a combination of Beach House, Explosions In The Sky, Phoenix, and Animal Collective. There's so much to dig into with this album. The songs that aren't as exciting are perfectly-paced transition songs, the longer songs have so much dynamic range from ethereal, atmospheric shoegazing to bombastic, anthemic breakdowns that you'd hear from Thirty Seconds to Mars (except this band has substance).

Hurry Up, We're Dreaming is a massive expression of joy. The album taps into a childlike curiosity and just goes to town. Heavy reverb is used to give this triumphant sound. I will admit a lot of the songs and lyrics are forgettable but the emotion it creates just holds it together.

I wish I existed only inside this album. My favourite album of the entire decade, arguably my favourite of all time.. this album was everything I had been looking for from music.

The absolute joy this album delivers me, I'm just grateful. Everything I listened to after this album became less important just by its existence. I don't play this album often, as if fragile to touch, but I remember every single time I listened to this album.

The way it packages an entire lifetime in 73 minutes, every note is fucking precious. I stumbled upon this album one night in 2014 and it has been a part of me since. I'm not crying, you're crying!

I am not very happy with the direction the band took in these last albums, I was happier with the first ones. But it is not bad at all. 7/10

“Raconte-moi une histoire” starts: “wtf, we’re doing spoken word now? A bit corny, but okay, why not”
Few minutes in: “I’M NOT CRYING YOU ARE”

BEA 500 ranked album , BEA users you've done it again as this is a terrific album.

Firstly its a long album clocking in at 22 tracks and 72 minutes , fully absorbing everything takes a lot of commitment from listener to firstly listen once , then a second time and a needed third listen if you want to do it properly . But is it worth it ? Yes definitely

I prefer the slower more moody tracks rather than the few up tempo tracks .

Echo's Of Mine is totally epic .

Your feedback for Hurry Up, We're Dreaming