The King Of Limbs (studio album) by Radiohead 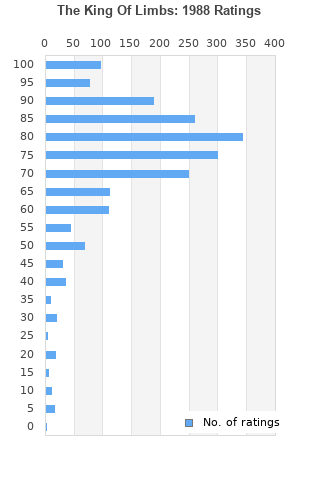 The King Of Limbs is ranked 8th best out of 22 albums by Radiohead on BestEverAlbums.com.

The best album by Radiohead is OK Computer which is ranked number 1 in the list of all-time albums with a total rank score of 91,122. 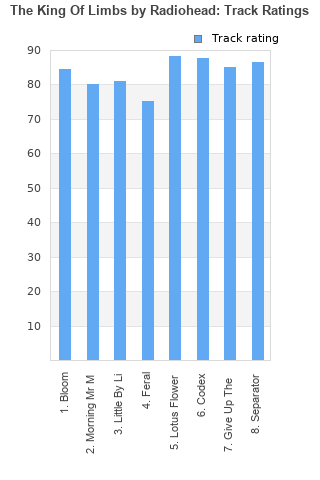 The King Of Limbs rankings

The King Of Limbs collection

The King Of Limbs ratings

Rating metrics: Outliers can be removed when calculating a mean average to dampen the effects of ratings outside the normal distribution. This figure is provided as the trimmed mean. A high standard deviation can be legitimate, but can sometimes indicate 'gaming' is occurring. Consider a simplified example* of an item receiving ratings of 100, 50, & 0. The mean average rating would be 50. However, ratings of 55, 50 & 45 could also result in the same average. The second average might be more trusted because there is more consensus around a particular rating (a lower deviation).
(*In practice, some albums can have several thousand ratings)
This album is rated in the top 9% of all albums on BestEverAlbums.com. This album has a Bayesian average rating of 75.6/100, a mean average of 73.9/100, and a trimmed mean (excluding outliers) of 75.6/100. The standard deviation for this album is 17.5.

The King Of Limbs favourites

The King Of Limbs comments

Very under-appreciated album (although to be fair it's still comfortably ranked in the top 500 on this site). I've always enjoyed this album. It's very different to all of their other work. Lotus Flower is one of my favourite Radiohead songs. I also enjoy Bloom and Give Up The Ghost. Codex would fit seamlessly on to Amnesiac/Kid A .

This album is over-hated in Radiohead's discography. It does what it aims to do so well, and though it's not my favorite Radiohead album, it's not a miss by any means.

A bit underwhelming. Better than Amnesiac, that's for sure.

The main drawback of this site is that mediocre albums can end up in the top 500 in this site if they have a popular artist's name attached to it (such as Radiohead's TKOL or The Beatles' With the Beatles). This album is far from being one of the best albums of all time and on a good day it's barely a listenable one. The only thing it's good for is putting you to sleep.

This feels longer than a Swans album.

I doubt there are many zealots for this album, but the Radiohead fans just need to take the L on this.

It's definitely not horrible or displeasing to the ears, but the loops and electronic sounds are so tiring. Apart from a few songs, it's a slog to get through, AND IT'S ONLY 8 SONGS!

Your feedback for The King Of Limbs