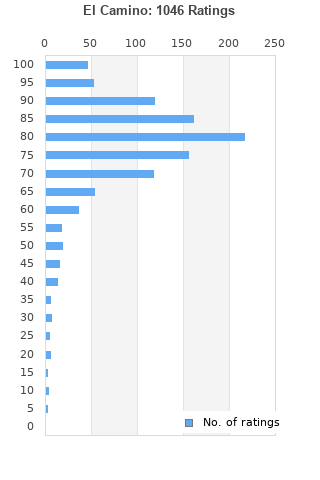 The Black Keys 2 CD - El Camino Australian Import Indie Rock CD Album
Condition: Very Good
Time left: 1d 2h 54m 52s
Ships to: Worldwide
£29.99
Go to store
Product prices and availability are accurate as of the date indicated and are subject to change. Any price and availability information displayed on the linked website at the time of purchase will apply to the purchase of this product.  See full search results on eBay

El Camino is ranked 2nd best out of 11 albums by The Black Keys on BestEverAlbums.com.

The best album by The Black Keys is Brothers which is ranked number 317 in the list of all-time albums with a total rank score of 6,241. 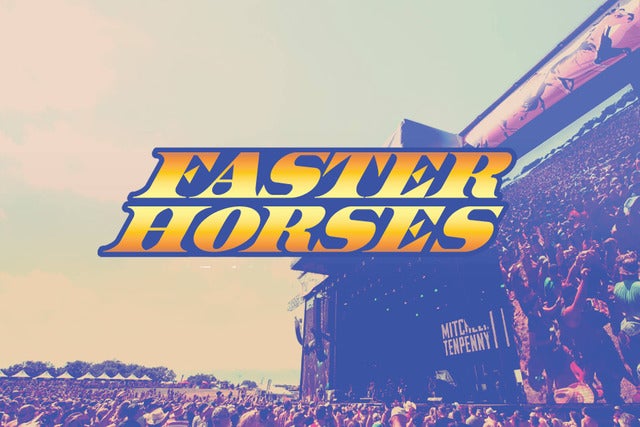 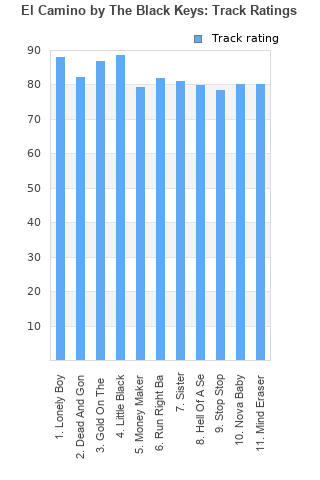 Rating metrics: Outliers can be removed when calculating a mean average to dampen the effects of ratings outside the normal distribution. This figure is provided as the trimmed mean. A high standard deviation can be legitimate, but can sometimes indicate 'gaming' is occurring. Consider a simplified example* of an item receiving ratings of 100, 50, & 0. The mean average rating would be 50. However, ratings of 55, 50 & 45 could also result in the same average. The second average might be more trusted because there is more consensus around a particular rating (a lower deviation).
(*In practice, some albums can have several thousand ratings)
This album is rated in the top 3% of all albums on BestEverAlbums.com. This album has a Bayesian average rating of 78.1/100, a mean average of 76.9/100, and a trimmed mean (excluding outliers) of 78.1/100. The standard deviation for this album is 15.0.

"Rock is dead"....when somebody tells me this sentence, my answer is "listen El Camino".
Who says you can't listent to really good Rock & Roll music in 21st century?

A real (good) mixed bag. Since most of the songs have a similar sound/structure, subjectivity comes into play a lot more than usual.

It's a fun album, but some songs are more memorable than others

It has some good hits in there but It isn't that good of an album.

It goes downhill fast, but for all I care, it has some of the best Alt Rock tracks ever made. Love it.

El Camino is The Black Keys best album, and its a good one. With lots of really good songs, and few weak ones it about as good an album as you could ask for from The Black Keys. However, I don't think Th Black Keys are a spectacular band, so, while this is likely the best they'll ever achieve, it's not an all time great. A really good album, but nothing more.

While there are some solid songs on here, I feel this was the beginning of their decline, but only so slightly.

Your feedback for El Camino