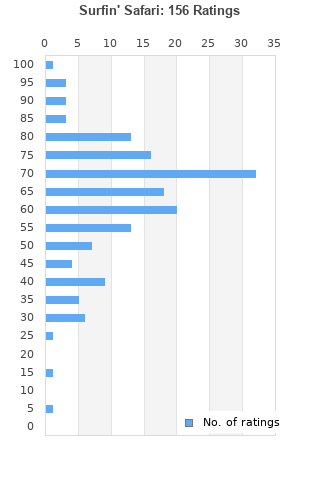 Surfin' Safari is ranked 14th best out of 66 albums by The Beach Boys on BestEverAlbums.com.

The best album by The Beach Boys is Pet Sounds which is ranked number 12 in the list of all-time albums with a total rank score of 51,615. 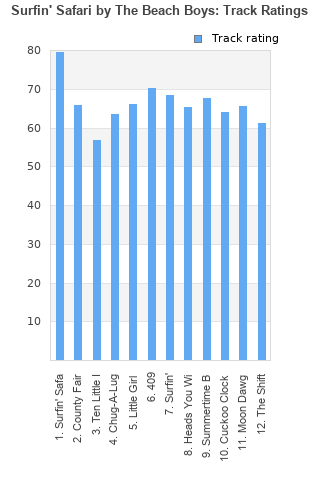 Rating metrics: Outliers can be removed when calculating a mean average to dampen the effects of ratings outside the normal distribution. This figure is provided as the trimmed mean. A high standard deviation can be legitimate, but can sometimes indicate 'gaming' is occurring. Consider a simplified example* of an item receiving ratings of 100, 50, & 0. The mean average rating would be 50. However, ratings of 55, 50 & 45 could also result in the same average. The second average might be more trusted because there is more consensus around a particular rating (a lower deviation).
(*In practice, some albums can have several thousand ratings)
This album has a Bayesian average rating of 63.5/100, a mean average of 62.5/100, and a trimmed mean (excluding outliers) of 62.9/100. The standard deviation for this album is 16.6.

A nice debut from the Boys, Surfin' Safari, 409, & Moon Dawg all show promise and even Summertime Blues although a cover works well.

The beach boys debut album is an enjoyable one, harmless fun really. It's incredibly charming, yet naive, but you have to remember how young they were when they made it. It's all throwaway material but it's fun. The title track is easily the best song on the album. Surfin' is good too. So this is where it all began. Short and sweet.

Brian Wilson was 18! Quite good for a first try.

The best is yet to come.

It's nothing special but pretty enjoyable. Surfin' Safari and 409 are the best tracks, County Fair is the worst. A decent album.

This album smells like chlorine. Pretty chill. I can dig it.

Has to be the most inconsistent album out there. There's some really tight songs here that I can't help loving: Surfin' Safari, Summertime Blues, Heads You Win..., etc. But then there's honestly so much tripe here which is musically broken, I'm sure. "County Fair" is the worst Beach Boys song I've heard, by far. And I've heard Kokomo.

Your feedback for Surfin' Safari