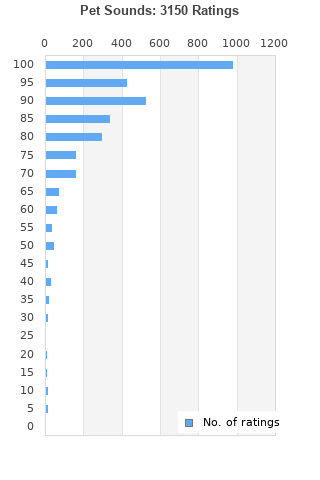 Pet Sounds is ranked as the best album by The Beach Boys. 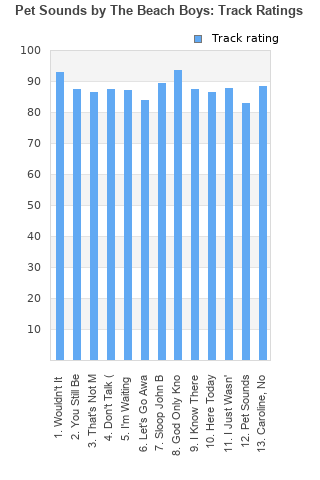 Rating metrics: Outliers can be removed when calculating a mean average to dampen the effects of ratings outside the normal distribution. This figure is provided as the trimmed mean. A high standard deviation can be legitimate, but can sometimes indicate 'gaming' is occurring. Consider a simplified example* of an item receiving ratings of 100, 50, & 0. The mean average rating would be 50. However, ratings of 55, 50 & 45 could also result in the same average. The second average might be more trusted because there is more consensus around a particular rating (a lower deviation).
(*In practice, some albums can have several thousand ratings)
This album is rated in the top 1% of all albums on BestEverAlbums.com. This album has a Bayesian average rating of 88.0/100, a mean average of 86.8/100, and a trimmed mean (excluding outliers) of 88.0/100. The standard deviation for this album is 15.6.

Experimental sixties geniuses at their best.

Simply stunning. The melodies and harmonies are absolutely wonderful. The production qualities were monumental and pushed things forward in popular music at the time.

Whenever I'm in the car with either of my grandfathers, this is an album I put on for them. If you are a musician and you want to study great melodies and harmonies, this album has got the harmonies believe me. It's great music. Should it be #12? If its popular opinion, I'm not gonna argue but there is a huge difference between popular opinion and the fact that people don't form their own opinion on a given album and they just agree with someone else's opinion that that album is great. In this case, I think this album rose to the top based on its greatness but should it be #12? No album that is that high should be that high because of how old it is. I mean its melodic and great but its above average songwriting wise shouldn't make it this high. I can think of like 50 albums that are just as deserving as this album for the rank that it is. This album does not have great music theory or great chord progressions and it could have been written a bit better.

Pet Sounds is Brian Wilsons answer to Rubber Soul, and it's an amzing one as well. Every song feels real, and brings different emotions with them. The chord progressions are great, and the vocals are iconic. God Only Knows and Wouldn't it be nice are the two high points on the album, and Beach Boys got the best of this battle. But John, Paul, George and Ringo hadd more up there sleeve, as we could see in 1967.

If there has ever been a perfect sound, something so balanced in timbre and tone that your ears drink it in like Dr. Pepper; something so emotionally rich with tannins and sweetness that you're left with the promise of infinite drunkenness without the slightest threat of a hangover, it's Brian Wilson's voice on "Wouldn't it Be Nice."

Music for boy scouts. with so much positive feedback on this album im surprised we dont have justine bieber in top 10 artists , but i guess all the old gisers that "rocked" to this music in thier youth have double standards- pop then was masterpiece pop now is bleh - news flash for u, they both suck.

PS u can down vote this comment all u want i dont care, here is the truth bomb for u, this album is weak.

On a lovely way... looks like "the ethernal second": i have seen in many many charts always so highly ranked, despite who's the autor... never seen in 1st place on a ranking...

What can one say. It's Pet Sounds

I struggle with The Beachboys. They’re just a wee bit twee or something. I get the genius at play here in their pop song-writing and the path they helped clear for today’s music but its just not something i’d put on to listen to unless it was to give my kids something catchy and fun to sing along to.

Maybe the greatest pop album of all time, a lot of melodies that sound like they've been in your head since your birth. Lyrics are simple and that makes them so special. Wouldn't It Be Nice, Sloop John B and God Only Knows are the best but the rest holds up.

Your feedback for Pet Sounds