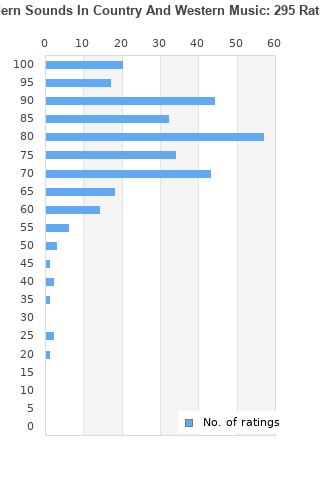 MODERN SOUNDS IN COUNTRY AND WESTERN MUSIC, VOLS. 1 & 2 [2/8] USED - VERY GOOD V
Condition: Very Good
Time left: 3h 5m 4s
Ships to: Worldwide
$19.41
Go to store
Product prices and availability are accurate as of the date indicated and are subject to change. Any price and availability information displayed on the linked website at the time of purchase will apply to the purchase of this product.  See full search results on eBay

Modern Sounds In Country And Western Music is ranked 2nd best out of 44 albums by Ray Charles on BestEverAlbums.com.

The best album by Ray Charles is The Genius Of Ray Charles which is ranked number 1254 in the list of all-time albums with a total rank score of 1,417. 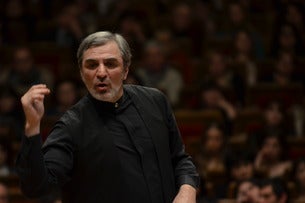 Listen to Modern Sounds In Country And Western Music on YouTube 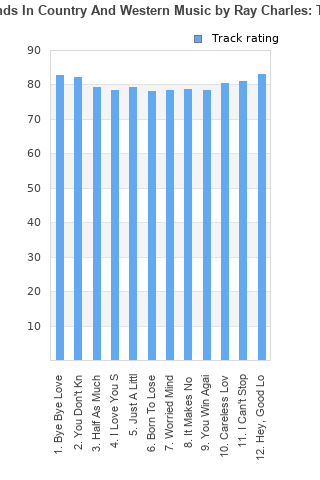 Rating metrics: Outliers can be removed when calculating a mean average to dampen the effects of ratings outside the normal distribution. This figure is provided as the trimmed mean. A high standard deviation can be legitimate, but can sometimes indicate 'gaming' is occurring. Consider a simplified example* of an item receiving ratings of 100, 50, & 0. The mean average rating would be 50. However, ratings of 55, 50 & 45 could also result in the same average. The second average might be more trusted because there is more consensus around a particular rating (a lower deviation).
(*In practice, some albums can have several thousand ratings)
This album is rated in the top 2% of all albums on BestEverAlbums.com. This album has a mean average rating of 78.0/100. The trimmed mean (excluding outliers) is 79.2/100. The standard deviation for this album is 14.4.

Oh cool, let's make soul, but now as blend as Frank Sinatra, with predictable jazz in the background (except when Ray is on the keys, which is almost never)... just like Frank. At least the white people are listening now, right? They sure broke down some of those damn racial barriers, which is cute, but 50 years later I'm just sitting here thinking why do these white boys need Ray to break down their racial barriers? Can't they just let him make more good music? And why does Ray feel obligated to meet them halfway, if not just for sales, which is understandable. But without all that context it is clear as day it's just a big waste of extreme talent. It's not as bad as Little Richard singing gospel, but it's in the same vein.

An essential gem of Ray's fabulous career! After years of hard work, this really broke Ray into absolute stardom. A personal favorite is You Don't Know Me.

I have nothing to say. Ray Charles is one of the greatest artists of all time. He is best known for his soul songs, but "Modern Sounds In Country And Western Music" is the best country album of all time in my opinion. Usually, I'm not a big fan of country albums but this album is really different because it mixes western music and soul. This album is absolutely original, revolutionary, exceptional. Thank you, Ray.

Excellent collection of songs by one of the best that's ever been. But I recommend the Vol 1 & 2 version.

I prefer Ray when he's doing straight up R&B, the ballads usually leave me a bit cold, so not a great fan of this.

His voice was never better. So much soul. Not quite Otis Redding, but close.

Your feedback for Modern Sounds In Country And Western Music