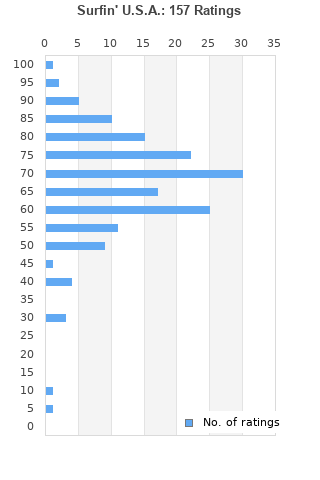 Beach Boys: 5 Classic Albums (5CD, Pet Sounds / Surfin' USA etc SEALED
Condition: Very Good
Time left: 1h 56m 57s
Ships to: Worldwide
$35.99
Go to store
Product prices and availability are accurate as of the date indicated and are subject to change. Any price and availability information displayed on the linked website at the time of purchase will apply to the purchase of this product.  See full search results on eBay

Surfin' U.S.A. is ranked 15th best out of 65 albums by The Beach Boys on BestEverAlbums.com.

The best album by The Beach Boys is Pet Sounds which is ranked number 12 in the list of all-time albums with a total rank score of 55,110. 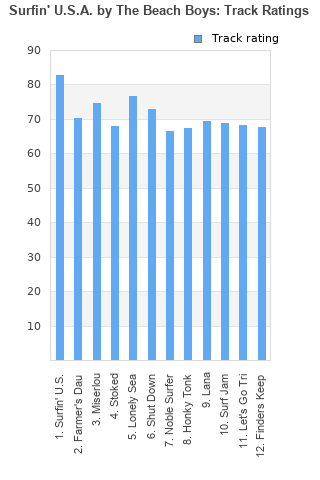 Rating metrics: Outliers can be removed when calculating a mean average to dampen the effects of ratings outside the normal distribution. This figure is provided as the trimmed mean. A high standard deviation can be legitimate, but can sometimes indicate 'gaming' is occurring. Consider a simplified example* of an item receiving ratings of 100, 50, & 0. The mean average rating would be 50. However, ratings of 55, 50 & 45 could also result in the same average. The second average might be more trusted because there is more consensus around a particular rating (a lower deviation).
(*In practice, some albums can have several thousand ratings)
This album has a Bayesian average rating of 68.5/100, a mean average of 67.8/100, and a trimmed mean (excluding outliers) of 68.1/100. The standard deviation for this album is 13.9.

The ultimate beach boys surf album. It's a definite improvement on their debut, in terms of quality. The title track is a fun reworking of Chuck Berry's sweet little sixteen. Other standouts are the absolutely beautiful lonely sea, Brian's fist great ballad, and, noble surfer. There's quite a few instrumental surf tunes on here, and they really add to the fun. Entertaining.

This was the first Beach Boys album I ever listened too, and it will remain as one of my favorite. Call me crazy, but I enjoy this album more than Pet Sounds. This album is just the perfect surfing music and there's something about that I really dig.

It's alright. Pretty random Miserlou appearance. I can dig it.

As an album, standing alone on it's merits this is a fairly average surf album showing off a young Carl's chops on guitar. The beginnings of the harmonies just coming into there own. As a fan (ok, major fan) the album jumps up a notch. An indispensable document in the Beach Boys history.

Your feedback for Surfin' U.S.A.