Time Out (studio album) by The Dave Brubeck Quartet 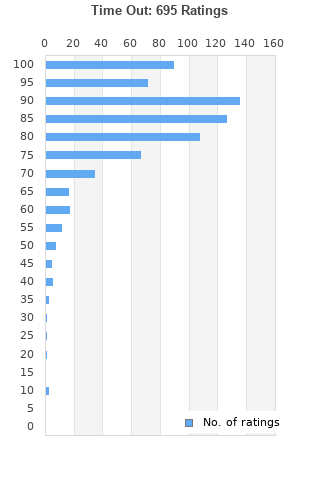 Time Out is ranked as the best album by The Dave Brubeck Quartet. 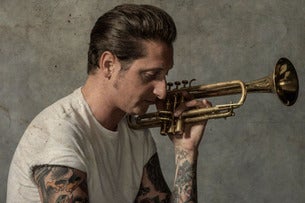 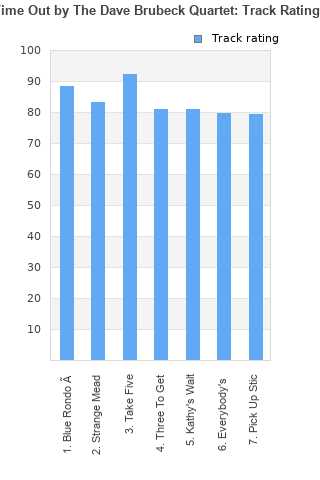 Rating metrics: Outliers can be removed when calculating a mean average to dampen the effects of ratings outside the normal distribution. This figure is provided as the trimmed mean. A high standard deviation can be legitimate, but can sometimes indicate 'gaming' is occurring. Consider a simplified example* of an item receiving ratings of 100, 50, & 0. The mean average rating would be 50. However, ratings of 55, 50 & 45 could also result in the same average. The second average might be more trusted because there is more consensus around a particular rating (a lower deviation).
(*In practice, some albums can have several thousand ratings)
This album is rated in the top 1% of all albums on BestEverAlbums.com. This album has a Bayesian average rating of 84.1/100, a mean average of 83.3/100, and a trimmed mean (excluding outliers) of 84.2/100. The standard deviation for this album is 13.5.

These are the best melodies in jazz I've ever heard and it helped me get into the genre.

If you're new to Jazz, this is the first thing I'd recommend checking out. The music is catchy but approachable, and you'll hear some MEGA hits of the Jazz world.

I never thought I would enjoy an Jazz album for the same reason I do with Heavy Metal ones.
Excting, vibrant, sense of motion.

The music is only part of the package.

"Theoretically it is as if Joe Morello's three beats had ceased to be the basic pulse, and had become triplets in a slow 4-beat blues -- though with Eugene Wright's 1-in-a-bar bass as the constant link between piano and drums. The listener who keeps abreast of the cross-rhythms here can congratulate themself on sharing with the Brubeck Quartet an enlightened rhythmic sense."

That's a quote from the original liner notes, that particular excerpt talking about the tune Kathy's Waltz. But it's the tone--intellectual, technical--that I want to point out. The experience of this album for the original listeners was inseparable from the liner notes, which taught listeners what they should be paying attention to--the time and meter within each song. Each track's metric approach was described, some more precisely than others but all of the descriptions talking about meter, eg for the first track it's "Blue Rondo à la Turk plunges straight into the most jazz-remote time signature, 9/8 - grouped not in the usual form (3-3-3) but in 2-2-2-3." It's inviting the listener to count along and participate in the intellectual side of music, the technical side.

In other words, it's not just saying "trust us, this is very technical, and you'd be impressed if you could understand." It's saying, "here's some technical information that you actually can understand and listen along with." And it promises the reward that you'll be able to "congratulate yourself" for your "enlightened" understanding.

Jazz liner notes were like this, verbose and intellectual, and sometimes they became hits along with the music on the vinyl. Like Kind Of Blue with its notes by Bill Evans, this album's liner notes were a huge part of the crossover appeal. It's no criticism of the music to point out the plain fact that for both albums, take away the liner notes, and they aren't crossover hits, no way. It's non-jazz listeners being instructed by the liner notes how to listen, and feeling clever and "enlightened" when they do so.

To get what this album was understood to be, you really do need to read the original liner notes (they're online) while listening, like 100% of the original listeners did.

Innovation fighting conservatism. This is a transitional album.
Even though these are Brubeck's smart compositions, Paul Desmond on Sax Alto plays a major role.
Also this is a great recording with an overall great timbre.

Your feedback for Time Out