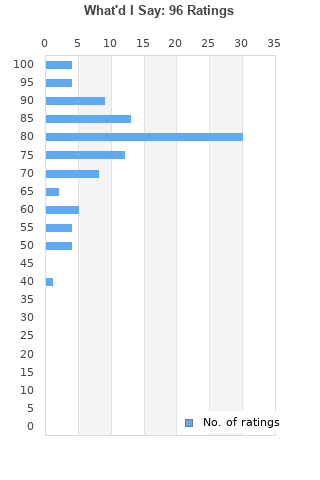 What'd I Say is ranked 4th best out of 53 albums by Ray Charles on BestEverAlbums.com.

The best album by Ray Charles is Modern Sounds In Country And Western Music which is ranked number 1166 in the list of all-time albums with a total rank score of 1,557. 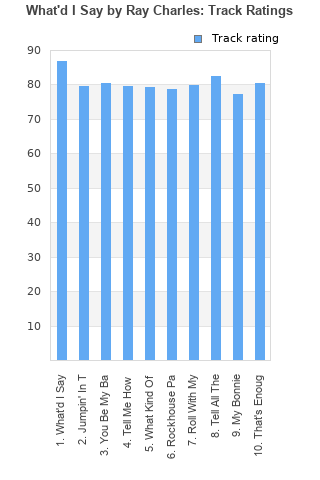 Rating metrics: Outliers can be removed when calculating a mean average to dampen the effects of ratings outside the normal distribution. This figure is provided as the trimmed mean. A high standard deviation can be legitimate, but can sometimes indicate 'gaming' is occurring. Consider a simplified example* of an item receiving ratings of 100, 50, & 0. The mean average rating would be 50. However, ratings of 55, 50 & 45 could also result in the same average. The second average might be more trusted because there is more consensus around a particular rating (a lower deviation).
(*In practice, some albums can have several thousand ratings)
This album is rated in the top 4% of all albums on BestEverAlbums.com. This album has a Bayesian average rating of 77.4/100, a mean average of 77.5/100, and a trimmed mean (excluding outliers) of 77.9/100. The standard deviation for this album is 12.3.

I feel like the opening track was the perfect bridge between rock ‘n’ roll and funk. The emphasis seems to switch between the 1st and 3rd (like in funk) and 2nd and 4th (as in rock ‘n’ roll) to such an extent that I honestly think it depends on one’s personal interpretation.

The rest of the album seems to follow the same pattern of hovering between rock ‘n’ roll and funk. But none of them can really be compared with the opener.

Not a bad track on this album. Hard to believe there was a time when a song like the title track might be considered too risqué!

The opening track (both parts) is epic.

The genius at his best!

A beautiful fusion album with elements of soul, jazz, gospel and rock and roll. Unique in its day and still great today.

The fusing of Jazz and Rock n' Roll here is awesome. I have heard people say that Ray is not only one of the best singers of all time, but is also the king of time- known for his ability to do slow (if you are a musician, you know that anyone can play fast, but not everyone can play slow), and syncopation.

Your feedback for What'd I Say