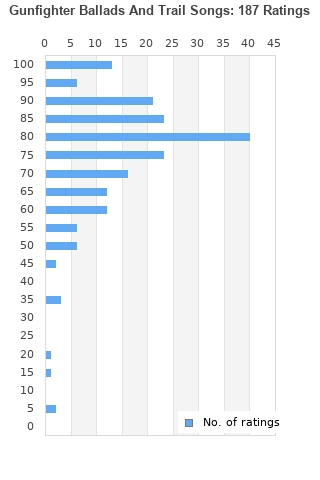 Gunfighter Ballads And Trail Songs is ranked as the best album by Marty Robbins.

Listen to Gunfighter Ballads And Trail Songs on YouTube 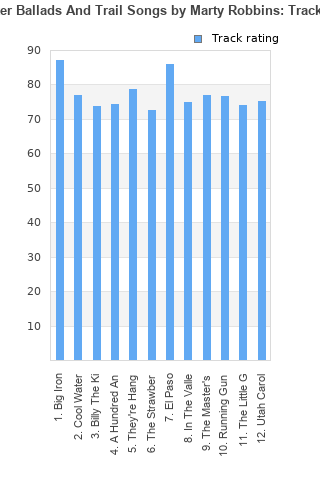 Rating metrics: Outliers can be removed when calculating a mean average to dampen the effects of ratings outside the normal distribution. This figure is provided as the trimmed mean. A high standard deviation can be legitimate, but can sometimes indicate 'gaming' is occurring. Consider a simplified example* of an item receiving ratings of 100, 50, & 0. The mean average rating would be 50. However, ratings of 55, 50 & 45 could also result in the same average. The second average might be more trusted because there is more consensus around a particular rating (a lower deviation).
(*In practice, some albums can have several thousand ratings)
This album is rated in the top 4% of all albums on BestEverAlbums.com. This album has a Bayesian average rating of 77.4/100, a mean average of 76.2/100, and a trimmed mean (excluding outliers) of 77.6/100. The standard deviation for this album is 16.6.

This is a pretty decent record with a few tracks outshining the other songs. These mainly consists of Robbins own songs which he wrote for the record such as Big Iron and El Paso. His voice is very strong as well and commands the whole record very strongly. The rest of the songs are good but not amazing which holds this album back a bit. It does get repetitive after a while as well and the songs become predictable. Overall, there is a lot of fun and enjoyment to be had on this album with some good song writing and catchy country tunes.

A nice collection of country and western songs that seems to start strong with the great “Big Iron” and slightly deplete in quality throughout the rest of the track list. A strong vocal performance from Robbins nonetheless.

What even was 1959?! This album's greatness gets partially lost in the fact that it was made during one of the peak years of Jazz on planet Earth, as well as the dawn of Rock N' Roll.

This album is one of the reasons I tend to disagree with anyone who says country sucks. Sure, it's really surface level and tacky now, but stuff like Big Iron, They're Hanging Me Tonight, and El Paso are great songs.

There are many reasons this album is one of the truly greats: Marty's song writing; his choice of other western songs;the backup singers; the first rate production; Marty's incredible voice; the fact that it was probably the first concept album. What makes it above others with many impressive qualities is the guitar playing of Grady Martin. For my money he should be considered right there with Clapton, Hendrix, and the ones Rolling Stone thinks are so great.

There are some excellent and enjoyable songs on this album. There's nothing wrong with them individually but across a whole album it all gets a bit samey. It may be a little conservative for some tastes, at least in it's delivery, but the songs are great, there's a John Ford movie in every one.

Less is more. That's what makes this album the greatest. It proves that when all other supposedly transcendent and revolutionary music gets old, and you just want to relax and enjoy some good and simple music, this album never fails to be uplifting.

Ah back when country music had some class. Songs about something other than the pap crap that passes for country today. A classic and classy record in every sense of the word.

Your feedback for Gunfighter Ballads And Trail Songs