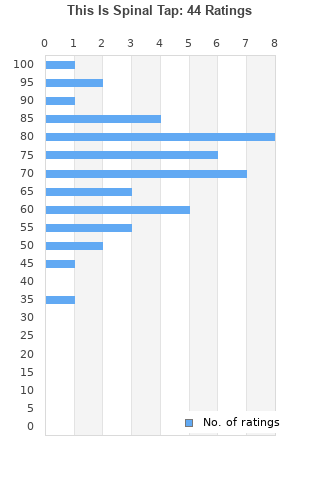 This is SPINAL TAP*movie*2000*ORIGINAL*POSTER*AD*FRAMED*FAST WORLD SHIP
Condition: New
Time left: 1d 23h 58m 52s
Ships to: Worldwide
£69.95
Go to store
Product prices and availability are accurate as of the date indicated and are subject to change. Any price and availability information displayed on the linked website at the time of purchase will apply to the purchase of this product.  See full search results on eBay

This Is Spinal Tap is ranked as the best album by Spinal Tap. 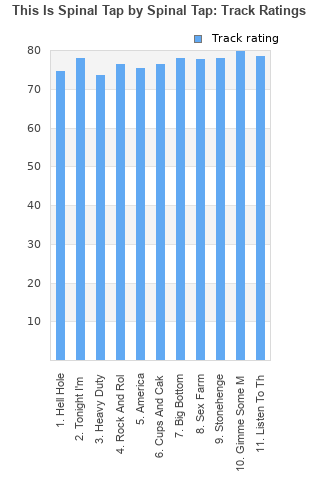 This Is Spinal Tap rankings

This Is Spinal Tap collection

This Is Spinal Tap ratings

Rating metrics: Outliers can be removed when calculating a mean average to dampen the effects of ratings outside the normal distribution. This figure is provided as the trimmed mean. A high standard deviation can be legitimate, but can sometimes indicate 'gaming' is occurring. Consider a simplified example* of an item receiving ratings of 100, 50, & 0. The mean average rating would be 50. However, ratings of 55, 50 & 45 could also result in the same average. The second average might be more trusted because there is more consensus around a particular rating (a lower deviation).
(*In practice, some albums can have several thousand ratings)
This album has a Bayesian average rating of 71.4/100, a mean average of 70.9/100, and a trimmed mean (excluding outliers) of 70.9/100. The standard deviation for this album is 13.9.

This Is Spinal Tap favourites

This Is Spinal Tap comments

This is a rarity as I don't buy soundtracks to movies, and the enjoyment level of this album is probably due to the association with the movie which is fantastic! With that said, Big Bottom, Sex Farm are great but the songs that put a smile on my face are those songs which are supposed to be from their early career - I often wonder which band they are parodying - Uriah Heep, Status Quo...hmmm. One word "Entertaining".

Easily the most influential rock album of the 20th century. Also, the cover art is absolutely astonishing! I saw these guys at a gig in Denver and stumpy joe actually spontaneously combusted halfway through sex farm! I still have the shirt... Best show I ever saw!

This is a lot of fun. Granted, I think my fondness for it is largely due to associations with the movie, but songs like "Tonight I'm Going To Rock You", "Big Bottom" and "Sex Farm really bring a smile to my face.

Much better than Shark Sandwich which disappointed me a lot at the time !

While nothing musicially spectactular goes on here, this "spoof" album is a good, fun listen and fans of classic hard rock will get a kick out of this.

Your feedback for This Is Spinal Tap