Hatful Of Hollow (album) by The Smiths 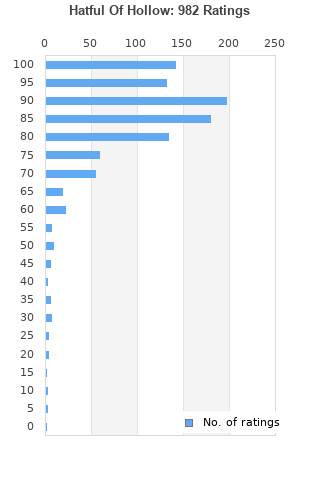 The Smiths - Hatful of Hollow (1984) CD 745099189327 V NR MINT GERMAN PRESS
Condition: Very Good
Time left: 15h 49m 26s
Ships to: Worldwide
£4.99
Go to store
Product prices and availability are accurate as of the date indicated and are subject to change. Any price and availability information displayed on the linked website at the time of purchase will apply to the purchase of this product.  See full search results on eBay

Hatful Of Hollow is ranked 5th best out of 14 albums by The Smiths on BestEverAlbums.com.

The best album by The Smiths is The Queen Is Dead which is ranked number 18 in the list of all-time albums with a total rank score of 49,603.

Sweet and Tender Hooligans - A Tribute to Morrissey and The Smiths
The Music Box, San Diego, United States. 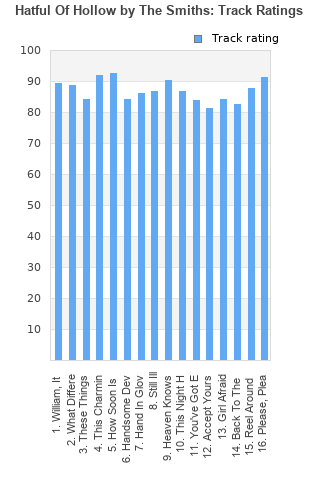 Rating metrics: Outliers can be removed when calculating a mean average to dampen the effects of ratings outside the normal distribution. This figure is provided as the trimmed mean. A high standard deviation can be legitimate, but can sometimes indicate 'gaming' is occurring. Consider a simplified example* of an item receiving ratings of 100, 50, & 0. The mean average rating would be 50. However, ratings of 55, 50 & 45 could also result in the same average. The second average might be more trusted because there is more consensus around a particular rating (a lower deviation).
(*In practice, some albums can have several thousand ratings)
This album is rated in the top 1% of all albums on BestEverAlbums.com. This album has a mean average rating of 84.0/100. The trimmed mean (excluding outliers) is 85.5/100. The standard deviation for this album is 14.1.

How Soon Is Now? is the best song on this comp. The rest is really good.

This is better than The Queen is Dead, top 10 albums of the 80s

I found me, one day, somewhere back last year, upset with the way things were going, people changed around me, and they seemed to be slowly forgetting the moments we spent together, likely, to be left on the past. In that especific day, I listened to this album, It wasn't the first time i listened to it, but I came out stunned, frozen from what I heard, as It described exactly what I was feeling. This album got me, emotionally like so so few can do. The Smiths speaked for me in those days, I'm glad I found this band in the right time.

Despite being a compilation it's as close to a proper album that you can get without it being one. All that really matter is that it's pretty much flawless from start to finish.

Great song after great song all in one place. Perfect if you don’t have time to listen to whole albums consecutively.

No one cares if it's a compilation. It's amazing. Much of the material hadn't been released before. So I consider it the best Smiths album

Technically a compilation, but still their best album. Rourkes bass is so well mixed that it really shows how hes one of the most underrated bassists ever.

The Smiths' self-titled album was a brilliant debut hindered by dull and colorless production. It failed to capture the initial raw energy of The Smiths back when they were finding their feet in 1983.

Hatful of Hollow, on the other hand, is a perfect alternative, containing the far superior 1983 John Peel recordings and the band's excellent single output in 1984. It feels like a full coherent album, so I consider it to be one.

I typically don't like to consider compilations as proper albums and avoid putting them in my charts, but for this and Louder Than Bombs, I make an exception. Most of these tracks don't show up on any of the Smiths' studio releases, so might as well rate it as any other album.

Your feedback for Hatful Of Hollow