Double Nickels On The Dime (studio album) by Minutemen 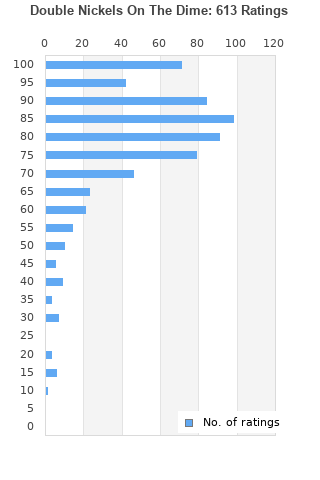 Double Nickels On The Dime is ranked as the best album by Minutemen.

Listen to Double Nickels On The Dime on YouTube 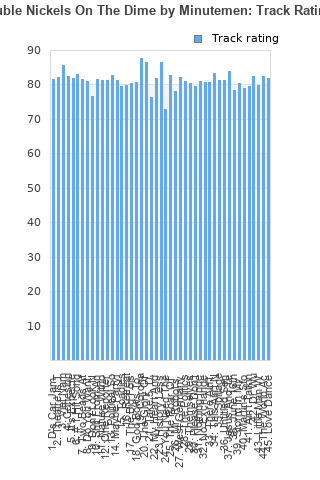 Double Nickels On The Dime rankings

Double Nickels On The Dime collection

Double Nickels On The Dime ratings

Rating metrics: Outliers can be removed when calculating a mean average to dampen the effects of ratings outside the normal distribution. This figure is provided as the trimmed mean. A high standard deviation can be legitimate, but can sometimes indicate 'gaming' is occurring. Consider a simplified example* of an item receiving ratings of 100, 50, & 0. The mean average rating would be 50. However, ratings of 55, 50 & 45 could also result in the same average. The second average might be more trusted because there is more consensus around a particular rating (a lower deviation).
(*In practice, some albums can have several thousand ratings)
This album is rated in the top 1% of all albums on BestEverAlbums.com. This album has a Bayesian average rating of 81.0/100, a mean average of 79.6/100, and a trimmed mean (excluding outliers) of 81.2/100. The standard deviation for this album is 16.5.

Double Nickels On The Dime favourites

Double Nickels On The Dime comments

45 songs and each song is different, creative, and unique in the punk canon. One of the great achivements of the 80s hardcore scene.

So many short but dope songs.

Double Nickels on the Dime is a series of well crafted frantic vignettes of punk, drawing influence from a wide variety of places. This band and album, along with Hüsker Dü and their album Zen Arcade, really helped to lay down the foundation for post-hardcore and Fugazi.

Awesome album! Plus the musicianship is really good to keep things interesting throughout so that the album doesn't feel like it's 70+ minutes long.

totally agree about "side chaff" but the sheer quantity of this album is extraordinary, as are about 20 (!) of the individual songs.

Really good. But am I going to listen to it in its entirety again? I am not so sure.

Your feedback for Double Nickels On The Dime