Purple Rain (soundtrack album) by Prince And The Revolution 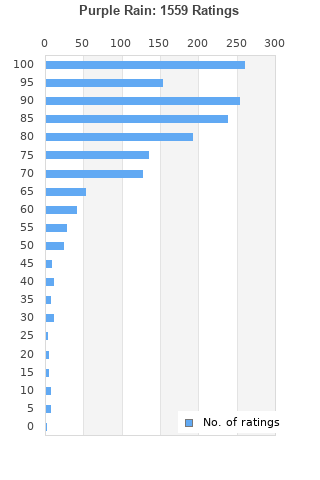 Purple Rain by Prince and the Revolution (Vinyl, Jun-2017, Warner Bros.)
Condition: New
Time left: 4h 15m 55s
Ships to: Worldwide
$38.00
Go to store
Product prices and availability are accurate as of the date indicated and are subject to change. Any price and availability information displayed on the linked website at the time of purchase will apply to the purchase of this product.  See full search results on eBay

Purple Rain is ranked as the best album by Prince And The Revolution. 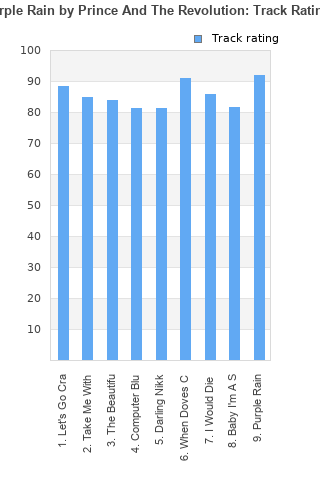 Rating metrics: Outliers can be removed when calculating a mean average to dampen the effects of ratings outside the normal distribution. This figure is provided as the trimmed mean. A high standard deviation can be legitimate, but can sometimes indicate 'gaming' is occurring. Consider a simplified example* of an item receiving ratings of 100, 50, & 0. The mean average rating would be 50. However, ratings of 55, 50 & 45 could also result in the same average. The second average might be more trusted because there is more consensus around a particular rating (a lower deviation).
(*In practice, some albums can have several thousand ratings)
This album is rated in the top 1% of all albums on BestEverAlbums.com. This album has a Bayesian average rating of 83.4/100, a mean average of 82.0/100, and a trimmed mean (excluding outliers) of 83.4/100. The standard deviation for this album is 16.4.

This has aged better than most 80's albums. Surprised it isn't higher in the overall ranking

Purple Rain considered as one of the greatest album of the 80s is kinda overrated.
Let’s Go Crazy is good opener but the guitar solo at the end is too much and sounds calculated, too loud.
Take Me With U is ok, nothing special except the intro, Beautiful Ones could’ve been a beautiful song but his screaming at the end spoils the song. Computer Blue sounds like a filler, Darling Nikki is a bad song there’s nothing great about it, When Doves Cry despite the weird intro is good, I Would Die 4 U is a good song too, Baby I’m a Star is the 3rd fillers of the album and Purple Rain is prince most popular hit. With 3 fillers + 2 ok songs out of 9 songs Purple Rain isn’t a masterpiece, it’s more from good to mediocre. 5/10

Purple Rain makes me cry both happy and sad tears. Joy and Pain. I love Baby I'm a Star - the backwards/hidden message by Wendy is fantastic. Love Sheila E, too! Makes me wonder why she is not credited, even though she went on tour with them. And Glamorous life, which she recorded while on tour, is fantastic!

Possibly my favorite song of the decade, another in the top 100, and that doesn't even include the title track. But it doesn't all maintain that quality level.

it took me til my 30s before I learned of prince’s virtuosity, but the dude was absolutely electric and it feels like he’s sometimes overlooked on all-time lists for best guitarists/musicians/artists. Even As a lifelong rock music audiophile his music eluded me until i saw a super fun prince cover band, the purple ones, who woke me the F up to the man’s music. prince was enigmatic, prolific, musically eclectic and wildly talented, and it hurts to realize that it took his untimely death to fully appreciate the man’s musical and cultural contributions to this world. there’s something in his catalogue for everyone’s musical tastes, and this album is his magnum opus by most standards. but i kind of agree with other commenters that newcomers to prince’s music may be best served working their way up to this one. the evolution of his style, his taste, his artistic genius and his sensibilities in acoustic production are all pretty wild to behold in retrospect, and the way his career led up to and crescendoed with purple rain is a thing of beauty to behold. rest in power, purple one, for you were too good for this world.

This record has been growing on me over the years. I blame myself for didn't pay attention to Prince for so many years. Purple Rain is, probably, my favorite song of the 80's.

Your feedback for Purple Rain