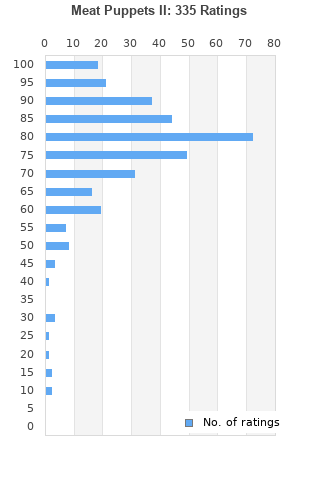 MEAT PUPPETS • Too High To Die | II 2 | Classic Puppets 🥩
Condition: Very Good
Time left: 2d 11h 6m 28s
Ships to: Worldwide
$29.99
Go to store
Product prices and availability are accurate as of the date indicated and are subject to change. Any price and availability information displayed on the linked website at the time of purchase will apply to the purchase of this product.  See full search results on eBay 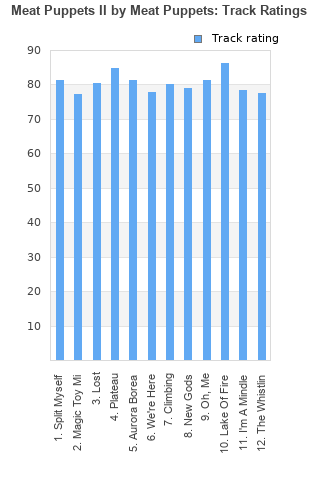 Rating metrics: Outliers can be removed when calculating a mean average to dampen the effects of ratings outside the normal distribution. This figure is provided as the trimmed mean. A high standard deviation can be legitimate, but can sometimes indicate 'gaming' is occurring. Consider a simplified example* of an item receiving ratings of 100, 50, & 0. The mean average rating would be 50. However, ratings of 55, 50 & 45 could also result in the same average. The second average might be more trusted because there is more consensus around a particular rating (a lower deviation).
(*In practice, some albums can have several thousand ratings)
This album is rated in the top 2% of all albums on BestEverAlbums.com. This album has a Bayesian average rating of 79.2/100, a mean average of 77.7/100, and a trimmed mean (excluding outliers) of 79.4/100. The standard deviation for this album is 15.5.

Pretty awesome! Love his hysteric voice, and there are some real gems here. Combining noise and punk and alt rock. Truly before their time.

Wonderfully evocative of the Arizona the band grew up in, and insinuating brilliantly the anxious state of Kirkwood's mind. A terrific set of songs, played with passion.

Love it. Such a laidback sound, but a biting tone underneath. Don't prejudge this as stoner-rock.

I think some of the tracks are jammed on fast-forward.

I've been listening to this all night for the first time. All I can say is that this is one of the coolest albums ever. It's kind of like Wilco before Wilco was big. Maybe with Stephen Malkmus flare? Obviously, these acts came after this album, but it's easy to see that those guys certainly benefit from this album. Anyhow, this is great, I can't wait to get into it more.

Nobody believes me that I actually owned this album before Nirvana, but I did. I bought this in Elena Mae's in Arbroath on a whim. I had £5 burning a hole in my pocket and chose it because I liked the name of the band and the fact it had a little sticker on the sleeve warning any possible buyer that the tape dropout on the album was meant to be there and the album should not be returned to their local record shop.

You might've first heard a few of their songs covered on nirvana's 1994 unplugged performance. In their original form, they're two steps away from a line dance at times, saved by the askew (almost strained) punk delivery and guitars. Swirling punk together with country (cowpunk, anyone?), with some songs sounding like country with punk or hard rock thrown in, is a truly unique experience as of the early 80s. A couple of songs nirvana covered, "plateau" (i love the eerie, atmospheric guitars in this one) and "lake of fire" (near-sludge, anyone?), are the best of the bunch, but songs like "aurora borealis" can be just as stunning despite, and/or because of, the unique genre mix the meat puppets perform under. From hillbilly to heavy metal, with a little psychedelic thrown in, this is punk like no other.

Your feedback for Meat Puppets II