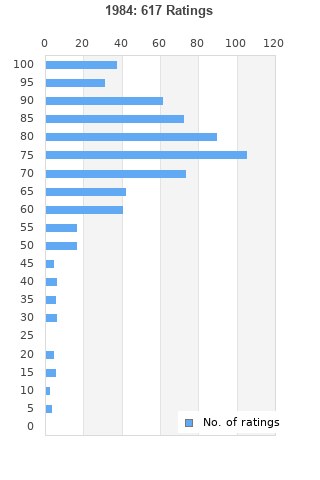 1984 is ranked 2nd best out of 16 albums by Van Halen on BestEverAlbums.com.

The best album by Van Halen is Van Halen which is ranked number 352 in the list of all-time albums with a total rank score of 5,462. 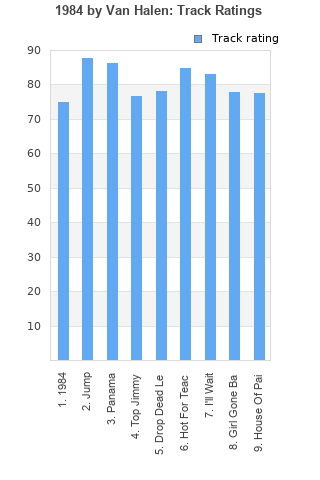 Rating metrics: Outliers can be removed when calculating a mean average to dampen the effects of ratings outside the normal distribution. This figure is provided as the trimmed mean. A high standard deviation can be legitimate, but can sometimes indicate 'gaming' is occurring. Consider a simplified example* of an item receiving ratings of 100, 50, & 0. The mean average rating would be 50. However, ratings of 55, 50 & 45 could also result in the same average. The second average might be more trusted because there is more consensus around a particular rating (a lower deviation).
(*In practice, some albums can have several thousand ratings)
This album is rated in the top 6% of all albums on BestEverAlbums.com. This album has a Bayesian average rating of 76.3/100, a mean average of 74.9/100, and a trimmed mean (excluding outliers) of 76.4/100. The standard deviation for this album is 16.9.

all the best elements of rock and roll. let it fly

The deep cuts on this album are better than the hits

The VH album with all the hits. Its not my favorite album from the band, but the peak of their mainstream popularity with David Lee Roth.

This was my intro to Van Halen, through obvious favorites like Jump, Panama, and Hot for Teacher. But outside of that, the deeper cuts are enjoyable but forgettable.

1984 is a sometimes inconsistent records with only really the the big 4 songs and girl gone bad really having a purpose with the rest of it being filler. obviously Eddie delivers, alex has his shining moment in Hot For Teacher, Dave is probably at his songwriting peak (Along with Eddie), and Micheal Anthony's bass fits the songs especially well.

Besides the three singles, "House of Pain" and "Girl Gone Bad" are the best songs on this album. Specially the latter. Great album, and pretty much alongside Def Leppard's Pyromania set the template for mid-to-late-80s hard rock/glam metal that was copied by bands like Bon Jovi, Poison, Motley Crue, Ratt and Cinderella and Dokken.

Some causal VH fans scroll past this album and subsequent albums for their use of synthesizers and just sounding very "80s". That's what I find charming. This is a classic album that sounds like its time and makes no qualms about it. Jump is one of the definitive classic rock songs of the 80s. Not far behind as some all time best VH songs like I'll Wait, Panama, and Hot for Teacher. A fine album for non-snobs.

Van Halen begins to soften up his sound with some great pop stuff like "Jump" and "I'll Wait". There is also some impressive virtuosity.

As a teenager in the early 80's, this was the sort of cassette I'd use my minimum wage paycheck on. What's not to love? VH gave us radio friendly hits to cruise by, and made for MTV videos to watch when we got home. (I wonder if they cringe as much as I do today when they see just how much they mugged for the camera).
Of course, this ended up being David's swan song, but what a way to go out. If someone is looking for quality classic rock, he/she will find it on 1984.