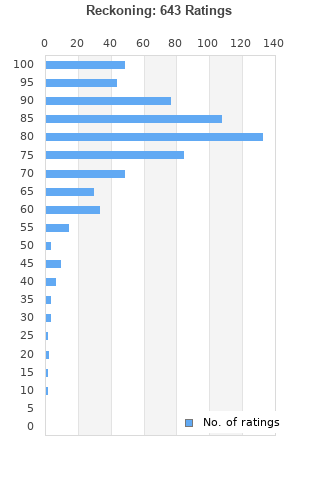 Reckoning is ranked 5th best out of 35 albums by R.E.M. on BestEverAlbums.com.

The best album by R.E.M. is Automatic For The People which is ranked number 53 in the list of all-time albums with a total rank score of 21,845. 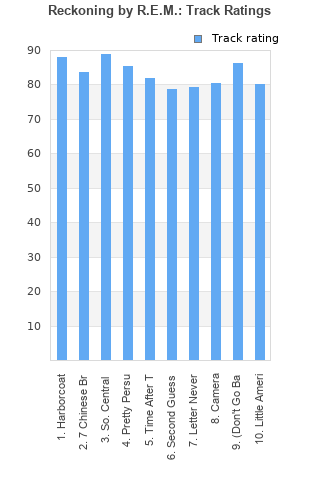 Rating metrics: Outliers can be removed when calculating a mean average to dampen the effects of ratings outside the normal distribution. This figure is provided as the trimmed mean. A high standard deviation can be legitimate, but can sometimes indicate 'gaming' is occurring. Consider a simplified example* of an item receiving ratings of 100, 50, & 0. The mean average rating would be 50. However, ratings of 55, 50 & 45 could also result in the same average. The second average might be more trusted because there is more consensus around a particular rating (a lower deviation).
(*In practice, some albums can have several thousand ratings)
This album is rated in the top 2% of all albums on BestEverAlbums.com. This album has a Bayesian average rating of 79.8/100, a mean average of 79.0/100, and a trimmed mean (excluding outliers) of 79.9/100. The standard deviation for this album is 14.4.

I like the live feel of this album compared to Murmur, which feels more like R.E.M. still finding themselves. Used to love watching "Left of Reckoning" also

Really good album. I appreciate that REM couldn't just keep churning out albums with the same sound and approach forever but those IRS discs really are special. I don't agree that the band was lousy after going to the majors but they were definitely different.

My favorite of REM’s, and also the best with murmurs right behind. Extremely high highs and meh lows

One of my favorite R.E.M albums , clearly better that Murmur IMO . "Pretty Persuasion" & "Don't Go Back To Rockville" sit comfortably as 2 of my all time R.E.M tracks . Only 2 tracks bomb here in "Time After Time" and "Second Guessing" , everything else is either good or great. Oh and it stands the test of time really well as I never get tired of listening to it.

As a traditionally structured guitar-pop album, this couldn't be much better. Because its melodies are so perfect and unsentimental, I haven't tired of it after more than 30 years. I think it helps that the songs are not explicit, because in that way they keep the listener's imagination active. It's not just that you can lay your own shifting meanings into the lyrics depending on your state of mind, but at many points the music is layered and opaque without being muddy, which must have been a very hard balance to achieve, and that keeps it interesting after many years. They also avoided some of the fashions of the day that might have dated their sound and came up with an original sound connected to uniquely American folk traditions. For a band that idolized New York punk, they surprisingly gravitated toward a folk sound that was probably very true to their personal experiences having grown up in the deep south. I think the band got weaker later when they tried to sound more like their New York and glam-rock idols. Early R.E.M. sometimes bring to mind the sensibility of Harry Smith, who was both a mysterious avant-garde bohemian artist, based in New York, and an archivist of American folk music. I think both R.E.M. and Harry Smith can be placed in a continuum of uniquely American creativity that combines the avant-garde with folk traditions.

This & Murmur is were they peaked for me and those are their first two LPs!

REM's second album veers towards the more Jangly rock sound that seems to be so heavily associated with the band. It's a brilliant record. It's murky and mysterious, and like it's successor, fables of the reconstruction, has something of the great outdoors about it. It's full of wonderful moments, harbour coat, pretty persuasion, and, central rain, are all classic REM. Camera, and, time after time, are more atmospheric tracks, and on, Rockville, the band go the whole country hog. There's no weak songs, letter never sent, seven Chinese brothers;etc, they're all excellent. It's crazy to think that REM would get even better, but they would.

Your feedback for Reckoning