The Smiths (studio album) by The Smiths 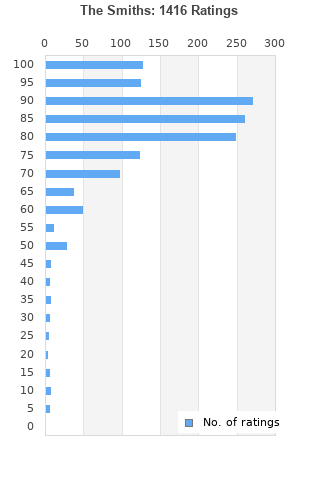 The Smiths is ranked 2nd best out of 15 albums by The Smiths on BestEverAlbums.com.

The best album by The Smiths is The Queen Is Dead which is ranked number 19 in the list of all-time albums with a total rank score of 43,759. 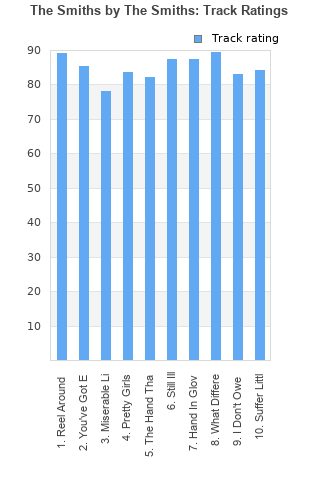 Reel Around The Fountain
Rating: 89 (385 votes)Comments:

What Difference Does It Make?
Rating: 90 (360 votes)Comments:

Rating metrics: Outliers can be removed when calculating a mean average to dampen the effects of ratings outside the normal distribution. This figure is provided as the trimmed mean. A high standard deviation can be legitimate, but can sometimes indicate 'gaming' is occurring. Consider a simplified example* of an item receiving ratings of 100, 50, & 0. The mean average rating would be 50. However, ratings of 55, 50 & 45 could also result in the same average. The second average might be more trusted because there is more consensus around a particular rating (a lower deviation).
(*In practice, some albums can have several thousand ratings)
This album is rated in the top 1% of all albums on BestEverAlbums.com. This album has a Bayesian average rating of 82.9/100, a mean average of 81.4/100, and a trimmed mean (excluding outliers) of 82.9/100. The standard deviation for this album is 15.0.

For me, a bit more enjoyable than The Queen Is Dead. Maybe there’s more variety in song style in this debut album that does it. Otherwise, it’s basically the same kind of strummy, cheeky, possibly clinically depressed Brit Pop.

Morrissey seems like the kind of guy who, if he was your friend, you’d roll your eyes at a lot.

Morrissey's melancholy and Marr's mastery on the guitar - a perfect storm that produces one of the best bands of all time and I am absolutely certain if the robots let us survive and humans are still around in the year 3021 they will still be considered as such. When I discovered this band and Marr's brilliance I had to get a guitar and start playing again.

Highlights are Hand In Glove, Still Ill and Suffer Little Children ( + This Charming Man if you count the US version). The mixture of the lyrics and the haunting guitar on Suffer Little Children is amazing. "Oh Manchester, so much to answer for...". I will keep trying to play this on guitar.... one day maybe.

It’s difficult for me to review this album objectively. I own ‘Hatful of Hollow’ on CD, playing it to death as a teen, and only listened to ‘The Smiths’ for the first time a few years ago. This album (‘The Smiths’) contains many of my least favourite tracks from Hatful of Hollow; admittedly better versions of ‘Still Ill’ etc.

It’s still a good album but I prefer ‘The Queen…’ and ‘Strangeways…’.

Quite a debut. It really introduced everyone to The Smiths, although for me it didn't age as much as their other records. I really liked Meat is Murder better. But, overall 85/100.

Reel Around The Fountain
Suffer Little Children
What Difference Does It Make?
Hand In Glove
Still Ill
You've Got Everything Now
Pretty Girls Make Graves

Favorites: Reel Around The Fountain; You've Got Everything Now; This Charming Man; Still Ill; Hand In Glove; What Difference Does It Make?

Your feedback for The Smiths