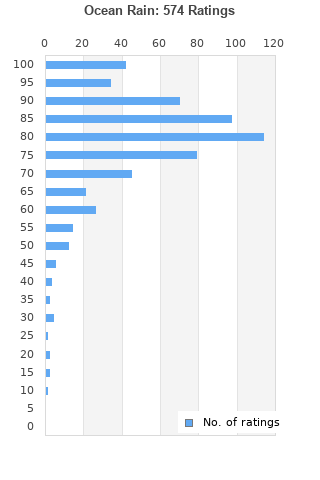 Echo And The Bunnymen - Ocean Rain (NEW CD)
Condition: Brand New
Time left: 9h 21m 24s
Ships to: Worldwide
£6.98
Go to store
Product prices and availability are accurate as of the date indicated and are subject to change. Any price and availability information displayed on the linked website at the time of purchase will apply to the purchase of this product.  See full search results on eBay

Ocean Rain is ranked as the best album by Echo & The Bunnymen. 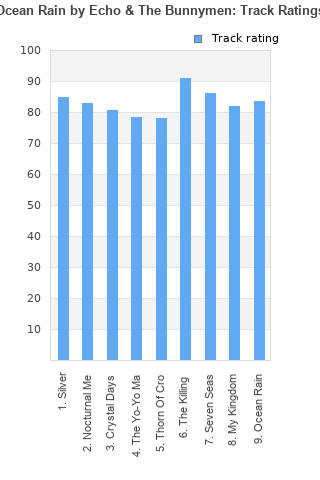 Rating metrics: Outliers can be removed when calculating a mean average to dampen the effects of ratings outside the normal distribution. This figure is provided as the trimmed mean. A high standard deviation can be legitimate, but can sometimes indicate 'gaming' is occurring. Consider a simplified example* of an item receiving ratings of 100, 50, & 0. The mean average rating would be 50. However, ratings of 55, 50 & 45 could also result in the same average. The second average might be more trusted because there is more consensus around a particular rating (a lower deviation).
(*In practice, some albums can have several thousand ratings)
This album is rated in the top 2% of all albums on BestEverAlbums.com. This album has a Bayesian average rating of 79.5/100, a mean average of 78.5/100, and a trimmed mean (excluding outliers) of 79.6/100. The standard deviation for this album is 14.9.

This album stands testament to a group at the peak of their powers with standout tracks "The Killing Moon" , "Thorn Of Crown" and title track "Ocean Rain" simply breath taking

This album should have made them massive , but it didn't. I've always said Echo and The Bunnymen were too commercial for the Indie Crowd and too Indie for the commercial crowd , they fell into the cracks between

The Greatest Album Ever Made as it was marketed ? Hardly , but bloody awesome none the less

Their masterpiece, every single track on this album is great. This whole album has a similar sound to the best track from their last album ‘The Cutter’ due to the rich instrumentation, which is a great thing in my book. The best of the best include ‘Silver’, ‘Seven Seas’, ‘Ocean Rain’ and, of course, ‘The Killing Moon’.

I managed to largely ignore these guys during my 120 Minutes phase. But this album worked for me.

Love the orchestral sound and the atmosphere, love every single track. Probably my favorite new wave album and one of my favorites from the 80s.

My favourite Echo and the bunnymen album. Ocean rain, sees the band embracing a more orchestral sound and it suits the songs perfectly. Highlights obviously include, killing moon, as well as, nocturnal me, and, crystal days. One of those where the album sleeve really captures the music inside.

Really love that album... Not every song is that great but as a whole it has a wonderful, dreamy atmosphere. Essential 80's stuff.

Your feedback for Ocean Rain