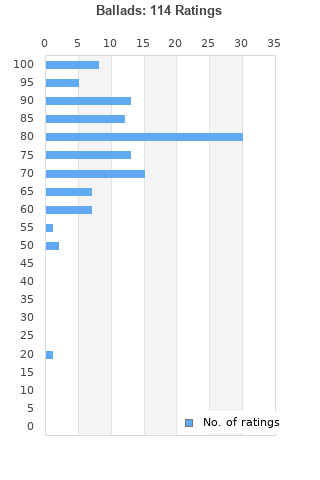 JOHN COLTRANE Ballads McCoy Tyner Acoustic Sounds 180 gram vinyl SEALED LP
Condition: New
Time left: 13h 50m 55s
Ships to: Worldwide
$119.97
Go to store
Product prices and availability are accurate as of the date indicated and are subject to change. Any price and availability information displayed on the linked website at the time of purchase will apply to the purchase of this product.  See full search results on eBay

Ballads is ranked 2nd best out of 6 albums by John Coltrane Quartet on BestEverAlbums.com.

The best album by John Coltrane Quartet is Africa/Brass which is ranked number 3410 in the list of all-time albums with a total rank score of 428. 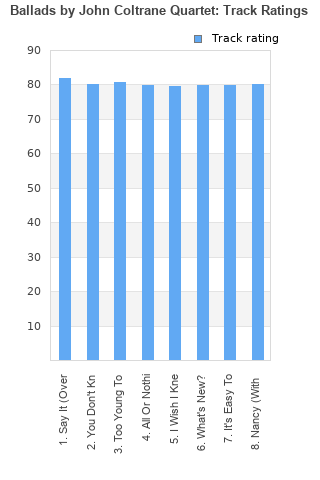 Rating metrics: Outliers can be removed when calculating a mean average to dampen the effects of ratings outside the normal distribution. This figure is provided as the trimmed mean. A high standard deviation can be legitimate, but can sometimes indicate 'gaming' is occurring. Consider a simplified example* of an item receiving ratings of 100, 50, & 0. The mean average rating would be 50. However, ratings of 55, 50 & 45 could also result in the same average. The second average might be more trusted because there is more consensus around a particular rating (a lower deviation).
(*In practice, some albums can have several thousand ratings)
This album is rated in the top 3% of all albums on BestEverAlbums.com. This album has a Bayesian average rating of 78.6/100, a mean average of 78.6/100, and a trimmed mean (excluding outliers) of 79.2/100. The standard deviation for this album is 12.9.

When Coltrane signed for Impulse! in 1961, he already had the reputation of being one of the most ardent tenor saxophonists of jazz. But "Ballads" still does not announce Trane's most controversial albums. For those who love Coltrane, this record is indispensable because it reflects a facet of the artist that we forget. There was a Coltrane who had a tender and peaceful approach. Coltrane, is a great and incomparable interpreter of ballads. On the other hand, if you expect something close to "Kind Of Blue", you're wrong. I can play the album, listen to it, enjoy it, leave my headphone, come back 5 minutes later and automatically immerse myself in a warm and calm atmosphere. The album is simple and relaxing, it allows to travel, to dream...

Best track: "Say It (Over And Over Again)"

A lot more passive compared to his work 60-61 and 65-67 yet still a beautiful collection of covers, very relaxing and immersive. I'm generally not to keen on this period of Coltrane's career (62-64) but this album is definitely a highlight.

Very elegant and relaxing. I like the shorter song format and it really shows Coltrane's ability to change style as this was released around the same time as Giant Steps and Africa/Brass which have a far more modal and experimental sound.

A record made later in Coltrane's career as an attempt to be more commercial, because his more experimental material wasn't selling as well as he'd liked. Nonetheless, a sincere effort, and beautiful throughout, with Coltrane's great Quartet in top form. My favorite of his, but I generally prefer his more melodic stuff. Only knock: the songs do have a sameness about them; it can seem like one long ballad. (If you love Coltrane, that's not necessarily a bad thing.) Highlights: "Too Young to Go Steady," "Say It (Over and Over Again)" and "You Don't Know What Love Is."

Your feedback for Ballads