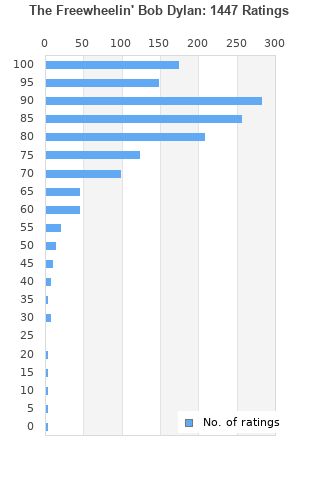 The Freewheelin' Bob Dylan is ranked 5th best out of 74 albums by Bob Dylan on BestEverAlbums.com.

The best album by Bob Dylan is Highway 61 Revisited which is ranked number 26 in the list of all-time albums with a total rank score of 35,895. 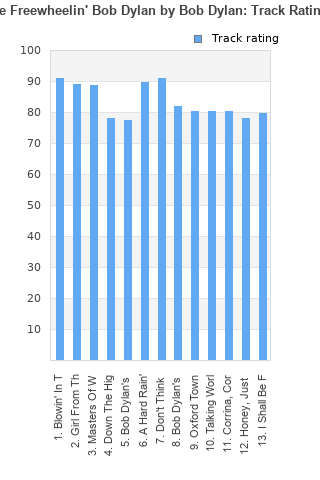 Rating metrics: Outliers can be removed when calculating a mean average to dampen the effects of ratings outside the normal distribution. This figure is provided as the trimmed mean. A high standard deviation can be legitimate, but can sometimes indicate 'gaming' is occurring. Consider a simplified example* of an item receiving ratings of 100, 50, & 0. The mean average rating would be 50. However, ratings of 55, 50 & 45 could also result in the same average. The second average might be more trusted because there is more consensus around a particular rating (a lower deviation).
(*In practice, some albums can have several thousand ratings)
This album is rated in the top 1% of all albums on BestEverAlbums.com. This album has a Bayesian average rating of 83.6/100, a mean average of 82.7/100, and a trimmed mean (excluding outliers) of 83.7/100. The standard deviation for this album is 14.4.

The highs are extremely high, but the consitancy isn't there yet for this to be one of his best projects. But like every other artist, he had to start somewhere, and this is a very great one

Girl From The North Country is probably one of my favorite songs...

First great album by Dylan, My favorites are Masters of War, Blowin In The Wind and Don't Think Twice

As a follow up to his debut I rate this much higher with some excellent tracks - Blowin In The Wind; Girl From The North Country, Masters Of War; Don't Think Twice - it is folk with more protest and aggression

There is just so much good Dylan that this album is seemingly (and understandably) overlooked. It's still real good, just not quite great for Dylan.

Sometimes forgotten in the wake of what came after (Highway 61, Blonde on Blonde, Blood on the Tracks etc.) but it is really an incredible work by a very young man. Dylan demonstrates conscience without succumbing to pretension. That's the genius here.

HONESTLY, this can go higher on my list it a master-work in singer-songwriter albums

The point where Dylan becomes the ultimate singer-songwriter that speaks a generation. Lyrically, from protests to surreal imagery, these songs never stop getting old. Other than the quality of vocals and musical arrangements, Dylan came in strongly from a different land.

Your feedback for The Freewheelin' Bob Dylan