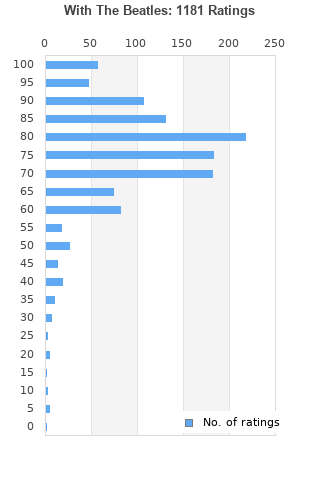 With The Beatles is ranked 12th best out of 66 albums by The Beatles on BestEverAlbums.com.

The best album by The Beatles is Abbey Road which is ranked number 3 in the list of all-time albums with a total rank score of 75,010. 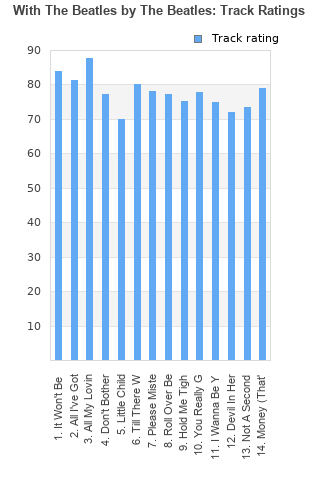 With The Beatles rankings

With The Beatles collection

With The Beatles ratings

Rating metrics: Outliers can be removed when calculating a mean average to dampen the effects of ratings outside the normal distribution. This figure is provided as the trimmed mean. A high standard deviation can be legitimate, but can sometimes indicate 'gaming' is occurring. Consider a simplified example* of an item receiving ratings of 100, 50, & 0. The mean average rating would be 50. However, ratings of 55, 50 & 45 could also result in the same average. The second average might be more trusted because there is more consensus around a particular rating (a lower deviation).
(*In practice, some albums can have several thousand ratings)
This album is rated in the top 9% of all albums on BestEverAlbums.com. This album has a Bayesian average rating of 75.7/100, a mean average of 74.9/100, and a trimmed mean (excluding outliers) of 75.8/100. The standard deviation for this album is 15.1.

With The Beatles favourites

With The Beatles comments

The second album by The Beatles, and a step down from PPM. All my loving is a masterpiece, unfortunately the only one on this album, but it's still Beatles, so not much filler going on here. It wont be long and Money are also good i think. 12/13 for me

This is an improvement in comparison to their first album, but still there are great songs here (All My Loving, It Won't Be Long, Till There Was You) and also awful ones (Little Child).

Great album, with a few gema and obvious filler

Good album from the Beatles. Underrated by beatles fans. It's also very far from their best record from the late 60's. Still worth a listen for Beatles fans.

This album is much better than Beatles For Sale

Underrated by Beatles fans imo, the production and songwriting is far better than their debut. The covers are pretty great too.
Best song(s): It Won't Be Long; All I've Got to Do; All My Loving; Don't Bother Me; Please Mister Postman; Not a Second Time

Your feedback for With The Beatles