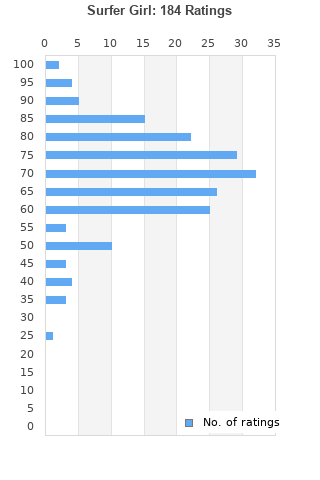 The Beach Boys - Surfer Girl Vinyl Record (G+)
Condition: Used
Time left: 7h 7m 24s
Ships to: Worldwide
$10.80
Go to store
Product prices and availability are accurate as of the date indicated and are subject to change. Any price and availability information displayed on the linked website at the time of purchase will apply to the purchase of this product.  See full search results on eBay

Surfer Girl is ranked 12th best out of 63 albums by The Beach Boys on BestEverAlbums.com.

The best album by The Beach Boys is Pet Sounds which is ranked number 13 in the list of all-time albums with a total rank score of 57,255. 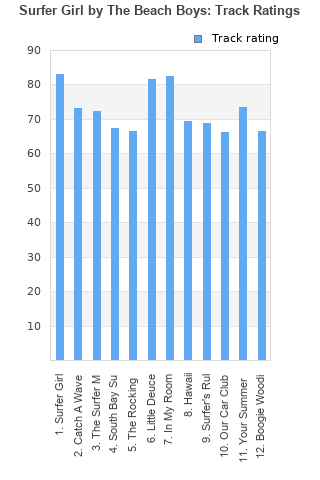 Rating metrics: Outliers can be removed when calculating a mean average to dampen the effects of ratings outside the normal distribution. This figure is provided as the trimmed mean. A high standard deviation can be legitimate, but can sometimes indicate 'gaming' is occurring. Consider a simplified example* of an item receiving ratings of 100, 50, & 0. The mean average rating would be 50. However, ratings of 55, 50 & 45 could also result in the same average. The second average might be more trusted because there is more consensus around a particular rating (a lower deviation).
(*In practice, some albums can have several thousand ratings)
This album has a Bayesian average rating of 70.2/100, a mean average of 69.7/100, and a trimmed mean (excluding outliers) of 70.0/100. The standard deviation for this album is 13.5.

Every time I listen to a Beach Boys record I come to the conclusion that the hits are great and the rest of the songs OK. A greatest hits album is enough for me.

An often overlooked album of the Beach Boys, but nonetheless, an incredible release!

For a 1963 pop album, that’s actually a pretty good consistency rate; only a pair of pointless instrumentals and the tacky surf songs feel like throwaways.

This is my favourite of the early beach boys albums, at least up until the, today album. They've really found their feet, and seem to know exactly what they're doing. The album opens with the absolutely beautiful title track. Stunning. Catch a wave, is a giddy hoot. Surfer moon, is another nice one, and, in my room, is one of Brian's early classics. Other mentions must go to, little deuce coupe,south bay surfer, your summer dream, and Carl has his moment in the spotlight for the surf instrumental, the rocking surfer. Sure, there's a bit of filler towards the end, but it really is a fun record. Good stuff.

I love their harmonies...

The outstanding track is In My Room, there's a couple of Beach Boys classics in Surfer Girl and Little Deuce Coupe. Catch a Wave, The Surfer Moon and Your Summer Dream are OK but other than that there's a hell of a lot of filler here. Some terrible lyrics also but hey the harmonies make up for it. Very much the sound of a band under pressure from the record label and not yet ready to make that big leap forward.

I wonder if In My Room had an influence on In The Garage (Weezer). Surfer Girl is my favorite early Beach Boys songs. Little Deuce Coupe is a classic, the rest is ok.

Your feedback for Surfer Girl