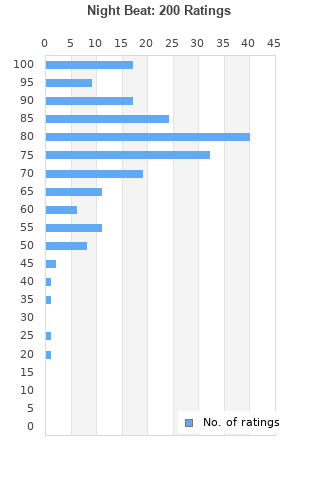 Night Beat is ranked as the best album by Sam Cooke. 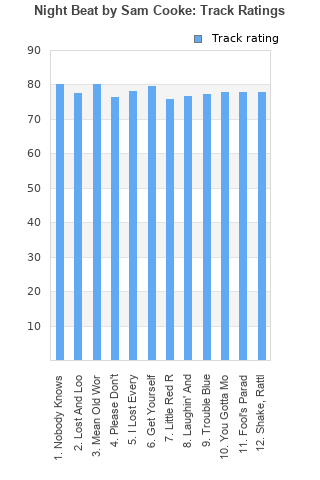 Rating metrics: Outliers can be removed when calculating a mean average to dampen the effects of ratings outside the normal distribution. This figure is provided as the trimmed mean. A high standard deviation can be legitimate, but can sometimes indicate 'gaming' is occurring. Consider a simplified example* of an item receiving ratings of 100, 50, & 0. The mean average rating would be 50. However, ratings of 55, 50 & 45 could also result in the same average. The second average might be more trusted because there is more consensus around a particular rating (a lower deviation).
(*In practice, some albums can have several thousand ratings)
This album is rated in the top 3% of all albums on BestEverAlbums.com. This album has a Bayesian average rating of 77.7/100, a mean average of 77.4/100, and a trimmed mean (excluding outliers) of 78.0/100. The standard deviation for this album is 14.7.

A great album from a great voice. I especially dig the blues numbers.

Best track: I Lost Everything
Worst tracks: Nobody Knows, Lost and Lookin, Please Don't Drive Me Away

There's a myth that the pre-Beatles early 60s were a barren time for rock and pop, with only sugary kid stuff. Sam Cooke is one of the counter-examples. A rock and roll artist from that era making music for adults--very rare. Also, most of them were singles artists; their albums don't stand up. This guy made coherent albums listenable as such. Such a mature, masterful artist for the time.

Many consider this to be Sam Cooke's crowning achievement, and it's truly hard to argue that point. 8/10!

This collection of songs--mostly covers--is Sam Cooke's guide to redemption: a carefully sequenced, soulfully crafted, soothing embrace for the lonely and down and out. Often overshadowed by the classic singles in Cooke's oeuvre such as "A Change Is Gonna Come," this album focuses on blues standards, though the strongest songs here are Sam Cooke's own original compositions, particularly the hard-boiled, downtrodden "Mean Old World."

Almost unbearably perfect. Sam Cooke's voice may be the sweetest we've ever heard. It's easier to appreciate his voice on this album than on the greatest hits albums most people know him from.

A lot of guys sabotage perfectly good relationships because they're afraid of commitment. Cowards!
I sabotage them so that I can put on THIS - the best breakup album of all time.

"A Heartbreaking Work of Staggering Genius" that seamlessly cycles through all the stages of grief and loss. By the end, after many tears and even more shots, he's got you back out on the dance floor (or, at least out of bed) ready to tear it up. The doctor is in!

"Night Beat" from 1963 is considered one of Sam Cooke's best albums. Since the album does not contain any of Cooke's hits or best known songs, the cause of the album's reputation is rather achieved through its overall casual late-night blues mood.

Cooke has written three of the twelve songs, and all three are among the album's strongest. Best known is probably "Mean Old World", which has both elements of blues and pop. "You Gotta Move" is also great with its light arrangement that allows room for a fine acoustic guitar.

The traditional "Nobody Knows the Trouble I've Seen" is also given a refreshingly simple arrangement, again, the acoustic guitar clear in the soundstage.

Some of the songs are perhaps a little too neatly arranged to be really interesting, but of course all numbers are well produced with Cooke's voice as the focal point.

No standouts on this album, but it's chock full of rollicking r&b with the most effortless voice ever.

Your feedback for Night Beat