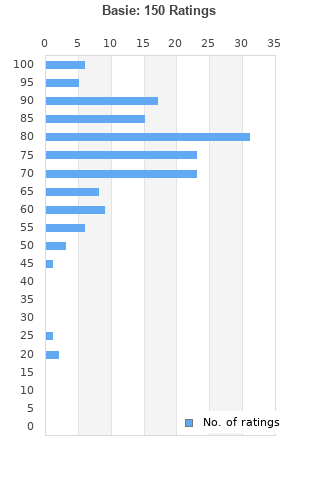 Sorry, no matches on eBay for "atomic Count Basie And His Orchestra & Neal Hefti".
See full search results on eBay 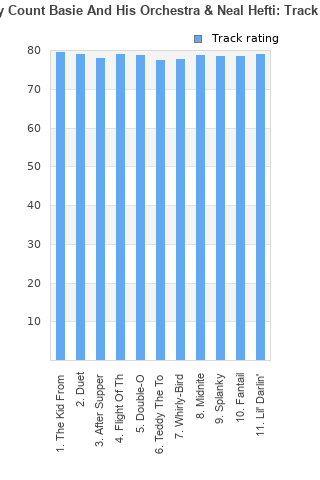 Rating metrics: Outliers can be removed when calculating a mean average to dampen the effects of ratings outside the normal distribution. This figure is provided as the trimmed mean. A high standard deviation can be legitimate, but can sometimes indicate 'gaming' is occurring. Consider a simplified example* of an item receiving ratings of 100, 50, & 0. The mean average rating would be 50. However, ratings of 55, 50 & 45 could also result in the same average. The second average might be more trusted because there is more consensus around a particular rating (a lower deviation).
(*In practice, some albums can have several thousand ratings)
This album is rated in the top 6% of all albums on BestEverAlbums.com. This album has a Bayesian average rating of 76.6/100, a mean average of 75.7/100, and a trimmed mean (excluding outliers) of 76.9/100. The standard deviation for this album is 14.0.

This album is extremely relaxing and I always get the urge to stick on this album late in the evening when I want to just chill. It always makes me forget about everything else and I think that is due to the seamless nature of the music. All the songs suit each other very well which creates a cohesive experience. The instrumentals are solid with some outstanding performances on both the Trumpet and Trombone. There is nothing really exceptional about this album but it is a great listen. Overall, an album I come back to a lot and if your in the right mood this record is amazing even though it is weak at times.

I've always known this album as The Atomic Mr Basie, but the original title was indeed Basie. It could have been called Hefti, really, the arrangements are the star. The playing throughout is top-notch, ensemble and soloists alike. It's just so...unadventurous. It's a sort of clinic in big band arranging of a certain type.

Have to disagree with a couple of previous comments that this is Basie's best. That's almost a shocking thing to say. Basie's best was in the 30s, when he had Lester Young and Buck Clayton and all those guys, and I don't think this even comes close.

first Who. Couple of classics

Upbeat music for cleaning the kitchen on a Saturday morning.

'The Kid From Red Bank' is an album highlight here! There's a few spots of greatness, but it's balanced out by some fairly mundane tracks as well. Overall a fairly decent album.

Great big band jazz. One of the best.

Energetic big band jazz. Enjoyable but I do find this genre a little bombastic and less interesting than others. Other's clearly love it though and kudos merrily un pc album art!

Basie at his best!

Your feedback for Basie