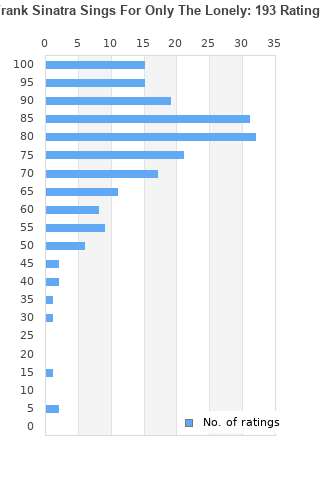 Frank Sinatra Sings For Only The Lonely is ranked 3rd best out of 98 albums by Frank Sinatra on BestEverAlbums.com.

The best album by Frank Sinatra is In The Wee Small Hours which is ranked number 391 in the list of all-time albums with a total rank score of 4,884.

Listen to Frank Sinatra Sings For Only The Lonely on YouTube

Frank Sinatra Sings For Only The Lonely track list 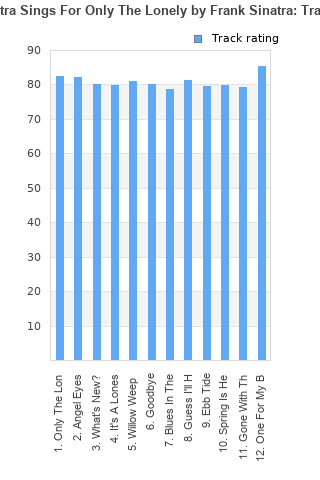 Frank Sinatra Sings For Only The Lonely rankings

Frank Sinatra Sings For Only The Lonely collection

Frank Sinatra Sings For Only The Lonely ratings

Rating metrics: Outliers can be removed when calculating a mean average to dampen the effects of ratings outside the normal distribution. This figure is provided as the trimmed mean. A high standard deviation can be legitimate, but can sometimes indicate 'gaming' is occurring. Consider a simplified example* of an item receiving ratings of 100, 50, & 0. The mean average rating would be 50. However, ratings of 55, 50 & 45 could also result in the same average. The second average might be more trusted because there is more consensus around a particular rating (a lower deviation).
(*In practice, some albums can have several thousand ratings)
This album is rated in the top 4% of all albums on BestEverAlbums.com. This album has a Bayesian average rating of 77.6/100, a mean average of 76.8/100, and a trimmed mean (excluding outliers) of 77.9/100. The standard deviation for this album is 16.9.

Frank Sinatra Sings For Only The Lonely favourites

Frank Sinatra Sings For Only The Lonely comments

A fantastic pearl in the great string of albums Frankie made from 1955 to 58. This is an exquisitely produced, recorded, and arranged concept album for the lonely. Album consists of lesser-known ballads, but that is the point.
Frankie's voice on this record is in his prime and excels tonally.

I can't give a rating lower than 100. This album is perfect!

One of many classic albums Frank Sinatra released in the fifties and early sixties, and possibly the best. This is my favourite Sinatra record along with, no one cares. The hauntingly beautiful orchestrations from Nelson Riddle are the perfect foil for Sinatra's voice, who was at his peak around this time. Angel eyes, what's new?, ebb tide, they're all stunning, but the clincher is off course the brilliant barroom torch song, one for my baby, much more a Sinatra signature tune than, my way, or, New York, New York ever were. A heart rending classic, only the lonely, is Frank Sinatra at his best.

Fabulous, somber, drinking a bottle of gin on your own song cycle. The genesis of mature, modern popular music can be found with the Sinnatra/ Nelson Riddle albums of the 50s.

Sinatra quote-"Only The Lonely was my Finest hour".

Great record featuring Sinatra at his best God-given voice. The only (minor)negative I have is all the "lonesome me" songs is a bit much in just one sitting.

Frankie's most introspective mood with Ava in the heart and soul. Painful, autumnal, sad, nocturnal, is the photography of a man alone. Nobody sing these feeling with more knowledge, dignity, self-respect. And at last..... one for my baby and one more for the road (Bill Millar's piano is a miracle).

Your feedback for Frank Sinatra Sings For Only The Lonely