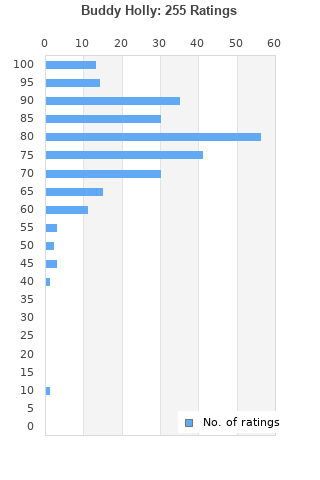 Buddy Holly is ranked as the best album by Buddy Holly. 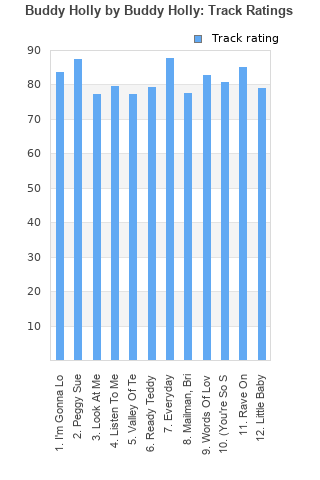 Rating metrics: Outliers can be removed when calculating a mean average to dampen the effects of ratings outside the normal distribution. This figure is provided as the trimmed mean. A high standard deviation can be legitimate, but can sometimes indicate 'gaming' is occurring. Consider a simplified example* of an item receiving ratings of 100, 50, & 0. The mean average rating would be 50. However, ratings of 55, 50 & 45 could also result in the same average. The second average might be more trusted because there is more consensus around a particular rating (a lower deviation).
(*In practice, some albums can have several thousand ratings)
This album is rated in the top 2% of all albums on BestEverAlbums.com. This album has a Bayesian average rating of 79.1/100, a mean average of 79.1/100, and a trimmed mean (excluding outliers) of 79.4/100. The standard deviation for this album is 12.4.

Obviously I had heard of Buddy Holly and his main tracks - but only got this album to listen to in last year or so. I knew I would like it based on what I had already heard. And I did like it - I think Rave On shows a great maturity and the future and development of Rock without the Roll

SO crazy to think that this is the last music Buddy Holly would ever record.

In hopes of doubling their airplay, the Crickets' second album was titled Buddy Holly and released on the Coral label. The only difference is the absence of backing vocals, but that's it. It's a Crickets record, another classic, and the last Crickets album before Holly's death. The Crickets would record and tour until 2016 but they would never have the impact they had with Holly.

It's funny that a small guitar band from Texas continue to be so influential. Guitar groups were around before this, but The Crickets had all the elements: Pop melodies and structures, cheery harmonies, love and heartbreak, and catchy riffs. It is the prototype for rock n' roll.

'Peggy Sue', 'Rave On', 'Words of Love' and 'Everyday' are some fantastic highlights here. Overall, this album has some peaks and valleys, but ends up as a pretty good record overall.

Such a good collection of songs it could pose as a Greatest hits.

Unlike some user's comments here, this was not influenced by the Beatles as it came out before their records in 1958. This is one of the first classic rock albums. An amazing vocal performer and songwriter.

A major classic, used to be one of my favorites

Your feedback for Buddy Holly