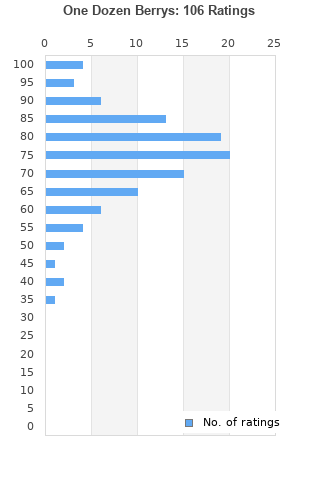 One Dozen Berrys is ranked 3rd best out of 44 albums by Chuck Berry on BestEverAlbums.com.

The best album by Chuck Berry is Chuck Berry Is On Top which is ranked number 596 in the list of all-time albums with a total rank score of 3,105. 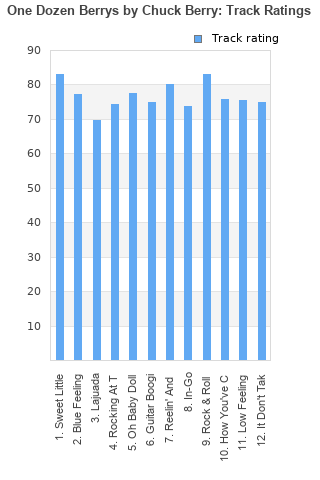 Rating metrics: Outliers can be removed when calculating a mean average to dampen the effects of ratings outside the normal distribution. This figure is provided as the trimmed mean. A high standard deviation can be legitimate, but can sometimes indicate 'gaming' is occurring. Consider a simplified example* of an item receiving ratings of 100, 50, & 0. The mean average rating would be 50. However, ratings of 55, 50 & 45 could also result in the same average. The second average might be more trusted because there is more consensus around a particular rating (a lower deviation).
(*In practice, some albums can have several thousand ratings)
This album is rated in the top 17% of all albums on BestEverAlbums.com. This album has a Bayesian average rating of 74.5/100, a mean average of 74.3/100, and a trimmed mean (excluding outliers) of 74.7/100. The standard deviation for this album is 12.8.

Uneven with a couple of classics,

This album isn't easy to rate. Despite being a big Chuck Berry fan, I'm left a bit disappointed with this record. Nearly half the album are instrumentals, and none of them are all that interesting. There are still good tracks to be found here especially on the re-issue version that I own and am reviewing that contains two bonus tracks, "Brown Eyed Handsome Man" and "You Can't Catch Me". I feel like this site has correctly placed this album as his fourth best.

A mix between blues and rock 'n' roll numbers.

Your feedback for One Dozen Berrys