Come Fly With Me (studio album) by Frank Sinatra 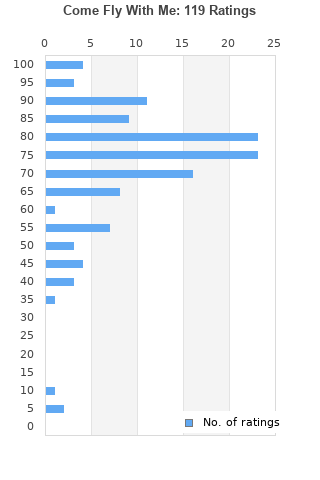 Come Fly With Me is ranked 4th best out of 98 albums by Frank Sinatra on BestEverAlbums.com.

The best album by Frank Sinatra is In The Wee Small Hours which is ranked number 391 in the list of all-time albums with a total rank score of 4,884. 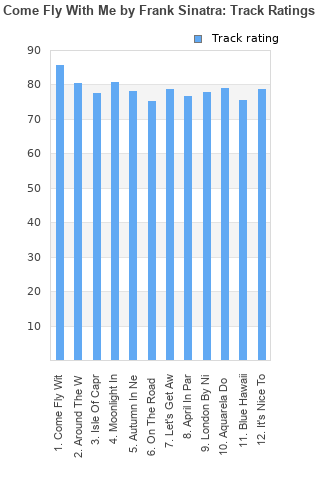 Come Fly With Me rankings

Come Fly With Me collection

Come Fly With Me ratings

Rating metrics: Outliers can be removed when calculating a mean average to dampen the effects of ratings outside the normal distribution. This figure is provided as the trimmed mean. A high standard deviation can be legitimate, but can sometimes indicate 'gaming' is occurring. Consider a simplified example* of an item receiving ratings of 100, 50, & 0. The mean average rating would be 50. However, ratings of 55, 50 & 45 could also result in the same average. The second average might be more trusted because there is more consensus around a particular rating (a lower deviation).
(*In practice, some albums can have several thousand ratings)
This album has a Bayesian average rating of 73.9/100, a mean average of 72.2/100, and a trimmed mean (excluding outliers) of 74.0/100. The standard deviation for this album is 17.4.

Come Fly With Me favourites

Come Fly With Me comments

The Perfect and one of the first "concept" albums. IT contains a superb collection of one of the most famous travel songs. One of Frankies finest albums:
Favorite tracks: Moonlight in Vermont, April in Paris, Brazil, Autumn in New York, London by Night.

'Come Fly With Me', 'Around the World' and 'London By Night' are some favorites here. A pretty good album from Sinatra's extensive catalog!

A trip around the world with Frank Sinatra, all the way from exotic booze in Bombay to pizza in his very own living room, come fly with me, follows Frank from Capri to Vermont, from Paris to Hawaii. Some great songs in the title track, let's get away from it all, and, Brasil. An enjoyable record from start to finish, the ultimate holiday LP.

Your feedback for Come Fly With Me