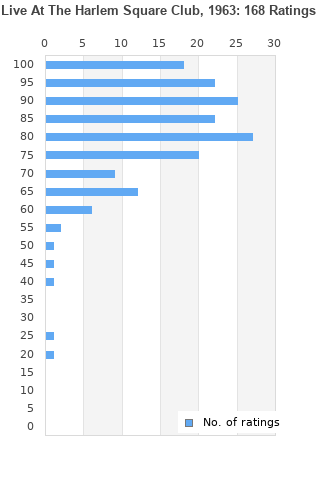 SAM COOKE-LIVE AT THE HARLEM SQUARE CLUB 1963-JAPAN BLU-SPEC CD2 D73
Condition: Brand New
Time left: 3d 11h 37s
Ships to: Worldwide
$21.84
Go to store
Product prices and availability are accurate as of the date indicated and are subject to change. Any price and availability information displayed on the linked website at the time of purchase will apply to the purchase of this product.  See full search results on eBay

Live At The Harlem Square Club, 1963 is ranked 2nd best out of 24 albums by Sam Cooke on BestEverAlbums.com.

The best album by Sam Cooke is Night Beat which is ranked number 1428 in the list of all-time albums with a total rank score of 1,235.

Listen to Live At The Harlem Square Club, 1963 on YouTube 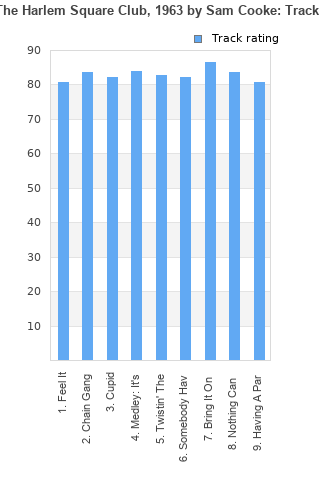 Rating metrics: Outliers can be removed when calculating a mean average to dampen the effects of ratings outside the normal distribution. This figure is provided as the trimmed mean. A high standard deviation can be legitimate, but can sometimes indicate 'gaming' is occurring. Consider a simplified example* of an item receiving ratings of 100, 50, & 0. The mean average rating would be 50. However, ratings of 55, 50 & 45 could also result in the same average. The second average might be more trusted because there is more consensus around a particular rating (a lower deviation).
(*In practice, some albums can have several thousand ratings)
This album is rated in the top 1% of all albums on BestEverAlbums.com. This album has a Bayesian average rating of 82.2/100, a mean average of 81.9/100, and a trimmed mean (excluding outliers) of 82.8/100. The standard deviation for this album is 14.6.

It's impossible not to feel good either during or after listening to this album. Sam Cooke has one of my favorite singing voices and the album puts it front and center in a live environment. Different than a lot of live albums as this could have been recorded in the studio and sounded almost exactly the same. Put this on when you're having a bad day, you'll thank me.

IT AIN’T THAT LEUKEMIA

Raw, no frills, plenty thrills. This is how you present a live record. No added bullshit like overdubs or even worse, added crowd noise. Of course it helps that the music is incredible and Cooke gives you goosebumps. Life affirming stuff. The only down is its taken me so long to listen to this. My dad had a wonderful compilation tape of all the wonderfull 50s and early 60s 45s that his mate made and I loved the Cooke stuff on there. It snapped though. I think he needs to hear this.

When I listen to this, everything is right in the world.

I'm no expert on soul music but my initial impression after listening to this a couple of times is that this is possibly the most powerful soul singing I've ever heard. It brings that gospel fervour to secular music and is so full of unbridled emotion it's incredible. I love the fact you can hear the crowd and it sounds like a pretty small club. The band are nailing it too. What an incredible gig!

Other comments have said it well. Get caught up in Cooke's mighty wave soulful sweat. Sometimes great music leaves you stanky.

One of the best live albums I've ever heard. What a magnificent voice!

One of the best live records ever! Like no other this album manages to capture the raw, sweaty, electrifying atmosphere of a gig in a small venue. It's just stunning. But: you absolutely have to listen to the original 1985 release - as the remix of 2005 re-release eclipses most of these atmospheric aspects.

Your feedback for Live At The Harlem Square Club, 1963