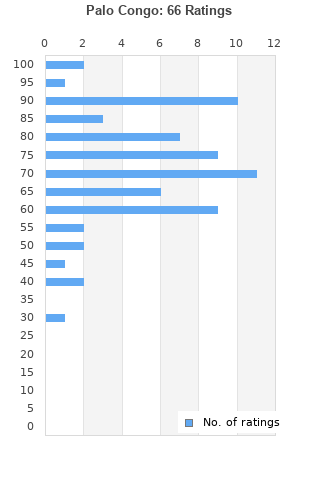 Palo Congo is ranked as the best album by Sabu. 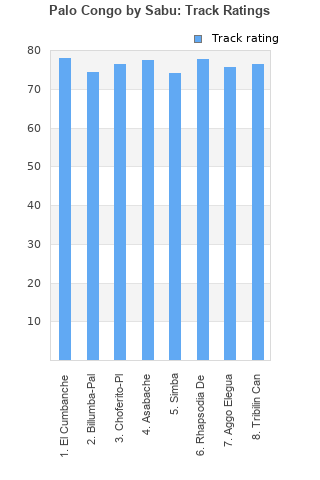 Rating metrics: Outliers can be removed when calculating a mean average to dampen the effects of ratings outside the normal distribution. This figure is provided as the trimmed mean. A high standard deviation can be legitimate, but can sometimes indicate 'gaming' is occurring. Consider a simplified example* of an item receiving ratings of 100, 50, & 0. The mean average rating would be 50. However, ratings of 55, 50 & 45 could also result in the same average. The second average might be more trusted because there is more consensus around a particular rating (a lower deviation).
(*In practice, some albums can have several thousand ratings)
This album has a Bayesian average rating of 72.5/100, a mean average of 72.4/100, and a trimmed mean (excluding outliers) of 72.4/100. The standard deviation for this album is 14.7.

There isn't really too much on this album to get incredibly excited about. Everything except for the percussion is quite bland and boring. The record needs a bit more experimentation for me. It does start very well with the opening track being full of flare and life but that slowly goes as the album goes on. Even the percussion starts to become quite repetitive and samey. For the most part though the percussion is amazing and really saves the album from being below average. The tempo and vibrant nature makes for a lot of fun moments in the music. I do enjoy the vocal very much when it comes up as well. Overall, this isn't a bad album but it is quite boring and not one that draws me back very often.

Although this is an album led by a percussionist, I found it most enjoyable when the guitar was featured.

I wonder if I understood the lyrics if this would be better for me. The rhythms you'd expect. REALLY wish it was mixed differently. Rhapsodia Del Maravilloso was probably my favorite track.

Your feedback for Palo Congo