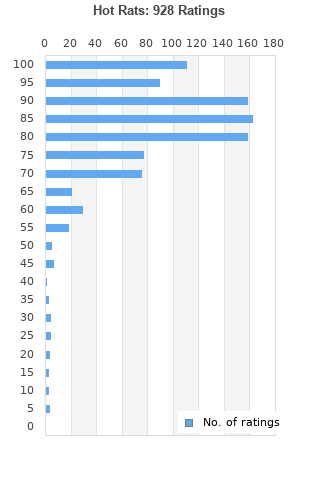 Hot Rats is ranked as the best album by Frank Zappa. 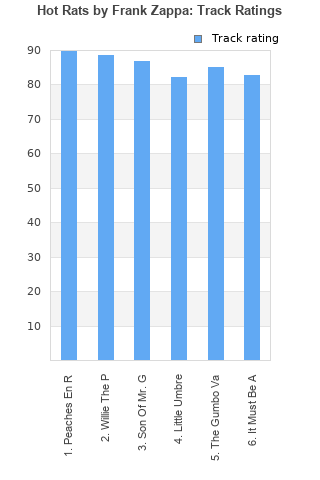 Rating metrics: Outliers can be removed when calculating a mean average to dampen the effects of ratings outside the normal distribution. This figure is provided as the trimmed mean. A high standard deviation can be legitimate, but can sometimes indicate 'gaming' is occurring. Consider a simplified example* of an item receiving ratings of 100, 50, & 0. The mean average rating would be 50. However, ratings of 55, 50 & 45 could also result in the same average. The second average might be more trusted because there is more consensus around a particular rating (a lower deviation).
(*In practice, some albums can have several thousand ratings)
This album is rated in the top 1% of all albums on BestEverAlbums.com. This album has a Bayesian average rating of 83.2/100, a mean average of 82.0/100, and a trimmed mean (excluding outliers) of 83.3/100. The standard deviation for this album is 14.6.

This is great jazz rock album, it has weird moments but sounds really cool. The only thing I would complain about is the vocals and lyrics on Willie The Pimp, they ruin a song for me on which i admire Zappa's musicianship as on whole record. I was surprised that I enjoyed that as I mostly hate his work with Mothers Of Invention.

I enjoy that music in the 60s just got really weird for a time, and Zappa was king of embracing the weird.

If you've ever thought jazz music is boring, you should give this a try, it will change your mind.

My favorite from Zappa. One of the few from him I still listen to with any regularity. Great fusion, great cameo from Beefheart

“A beautiful and madness piece”

I love the Jazz leanings of 'Little Umbrellas'. Track 2 side 2 (vinyl) then moves into an improvisation which is very 'Gongesque', particularly with the sax right at the front of the mix taking the lead through the first part and then handing over to violin in the second half. In contrast track 3 side 3 moves back into more of a Latin Jazz feel. I love the contrast on this album and wish Zappa had turned out more consistent albums like this which focus on musicianship rather than a lot of the satirical drivel on other later albums. I have got pretty much all of the core Zappa albums and most apart from a few are spoiled by the satirical or damright crude (not that I'm a prude) and unnecessary drivel.

Quite strange, yet very welcoming and digestible at the same time. Incredibly impressive instrumentation, and surely an influencer on many contemporary artists.

Your feedback for Hot Rats