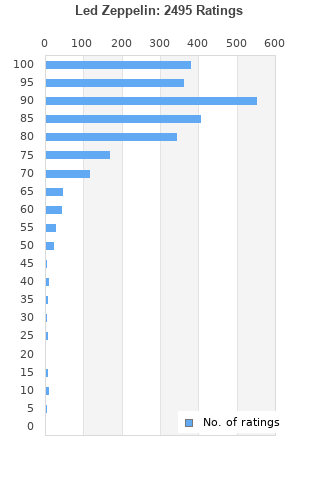 The best album by Led Zeppelin is Untitled (Led Zeppelin IV) which is ranked number 11 in the list of all-time albums with a total rank score of 52,614. 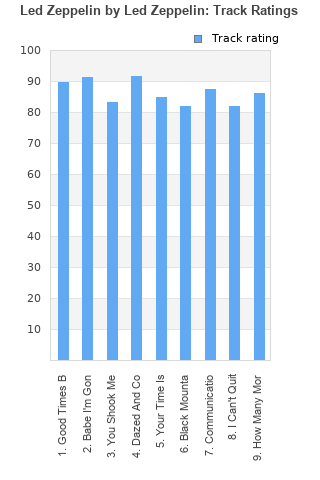 Rating metrics: Outliers can be removed when calculating a mean average to dampen the effects of ratings outside the normal distribution. This figure is provided as the trimmed mean. A high standard deviation can be legitimate, but can sometimes indicate 'gaming' is occurring. Consider a simplified example* of an item receiving ratings of 100, 50, & 0. The mean average rating would be 50. However, ratings of 55, 50 & 45 could also result in the same average. The second average might be more trusted because there is more consensus around a particular rating (a lower deviation).
(*In practice, some albums can have several thousand ratings)
This album is rated in the top 1% of all albums on BestEverAlbums.com. This album has a Bayesian average rating of 86.3/100, a mean average of 85.4/100, and a trimmed mean (excluding outliers) of 86.3/100. The standard deviation for this album is 13.2.

An awesome, massive sounding rock and roll record with serious punch with band members that are clearly unbelievably skilled.

This is great start of the great band. Dazed and Confused is incredibly influential for heavy metal.

For some reason I never got in to this album as much as all of their albums from Led Zep II to Physical Graffiti. For me the best was still to come. But no one can deny there's some incredible guitar riffs. My highlights are Good Times Bad Times and How Many More Times.

One of the best debut albums in rock history, that would help fuel a kickstart to heavy metal and psychedelic rock. Truly a sound no one could replicate that would translate into to early 70s. Screw you Rolling Stones for all the hate you put on this album!

For me, Babe I'm Gonna Leave You is such a tease for LZ II, and one of the band's best tracks in their discography.

This is my first Led Zeppelin album and I plan to listen to their entire discography as I have always been a fan of their hits. This is an incredible album for a debut and one of the best debuts I have ever listened to. Robert Plants delivery is amazing and he really shines next to the greatness of John Paul Jones. Jimmy Page and Jon Bonham. I think I finally see what all the fuss was about with them. The thing about most of these songs is that when they start off I am unsure but eventually half way through the song it comes together to build something great. I hadn't heard any of these 9 songs before listening to this album and I can't believe it took me so long. Also...yeah Jon Bonham is an insane drummer.

apparently, they knew right away. no kidding

Your feedback for Led Zeppelin