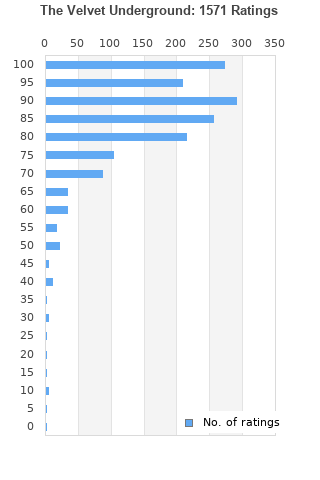 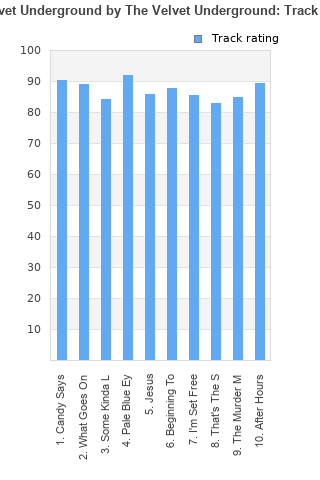 Rating metrics: Outliers can be removed when calculating a mean average to dampen the effects of ratings outside the normal distribution. This figure is provided as the trimmed mean. A high standard deviation can be legitimate, but can sometimes indicate 'gaming' is occurring. Consider a simplified example* of an item receiving ratings of 100, 50, & 0. The mean average rating would be 50. However, ratings of 55, 50 & 45 could also result in the same average. The second average might be more trusted because there is more consensus around a particular rating (a lower deviation).
(*In practice, some albums can have several thousand ratings)
This album is rated in the top 1% of all albums on BestEverAlbums.com. This album has a Bayesian average rating of 85.9/100, a mean average of 84.9/100, and a trimmed mean (excluding outliers) of 85.9/100. The standard deviation for this album is 14.0.

As I revisited it I enjoyed it much more than 1st time, but still I think thatthe first couple of tracks are the strongest and then quality decteases, but most of the songs are still decent. I don't like only Some Kinda Love and That's The Story Of My Life.

Great songwriting travels far. Although previous efforts were certainly more challenging, for me the self titled record has so much heart and depth in it's back to basics-esque presentation. Lou Reed ultimately has a chance to breathe in this album and he flourishes.

Nice vibe, but a little boring after couple of tracks for me. But still quite enjoyable listen for me.

This album is a bit more commercially driven for sure, but it's SUPER underrated, in my opinion. There is such an oddly infectious energy about it the draws the listener in.

Yes, this 1969 album is intentionally a more commercial sound than the brilliant, Nico assisted, 1967 effort. Yes, as a body of art it is inferior. Yes, it’s not technically as good. But, as much I love Velvet Underground & Nico, I prefer the highs of this 1969 album and there are no lows.

Great album, falls off a bit in the second half though.

Your feedback for The Velvet Underground