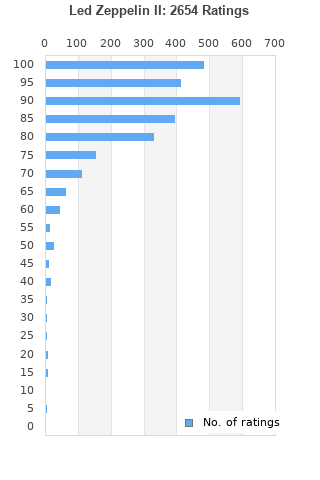 Led Zeppelin II is ranked 2nd best out of 22 albums by Led Zeppelin on BestEverAlbums.com.

The best album by Led Zeppelin is Untitled (Led Zeppelin IV) which is ranked number 11 in the list of all-time albums with a total rank score of 52,717. 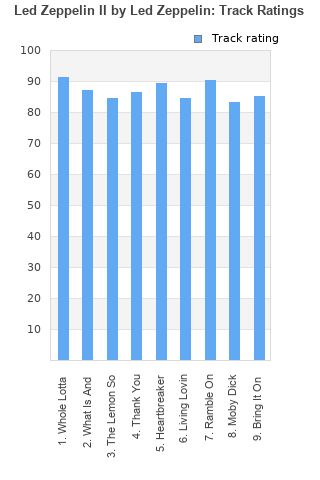 Rating metrics: Outliers can be removed when calculating a mean average to dampen the effects of ratings outside the normal distribution. This figure is provided as the trimmed mean. A high standard deviation can be legitimate, but can sometimes indicate 'gaming' is occurring. Consider a simplified example* of an item receiving ratings of 100, 50, & 0. The mean average rating would be 50. However, ratings of 55, 50 & 45 could also result in the same average. The second average might be more trusted because there is more consensus around a particular rating (a lower deviation).
(*In practice, some albums can have several thousand ratings)
This album is rated in the top 1% of all albums on BestEverAlbums.com. This album has a Bayesian average rating of 87.2/100, a mean average of 86.3/100, and a trimmed mean (excluding outliers) of 87.3/100. The standard deviation for this album is 13.0.

It is incredible that this album shows a large progression from the first album within the same year. Not settling on being a simple blues and rock'n'roll band there are signs of being more adventurous in the instrumentation with small elements of funk and work within the rhythm sections to be even more interesting.

A mixed bag, some superb elements to this like Thank You, Heartbreaker and the closing Bring It On Home.

Maybe their most consistent album. Highlights are Ramble On, Whole Lotta Love and Thank You. Shout out for the intro to Heartbreaker.

Second album by Led Zeppelin is as great as the first one if not better. Whole Lotta Love is obviously a classic, but Heartbreaker and Ramble On are great too.

It's hard to call an album this beloved underrated, but it just might be. LZIV rightfully gets all of the love, but II is equally great, in a more primal form.

Led Zeppelin II was one of the more intriguing blues influenced hard rock albums of any era. The styles vary throughout, as each track stands out on its own. Its abundant riff magic amid powerful rhythmic drive had been done already, as the first album's "How Many More Times" possessed that initial repetitive punch. But the riff, the vocals, and the rhythmic drive here in "Whole Lotta Love" became the exemplar of that great Zeppelin sound. A few songs have the incredible knack to start soft and mellow with incredible melody and then leap into the Zeppelin trademark funk and driving hard rock. LZII is one of the best albums in history.

Your feedback for Led Zeppelin II