Let It Bleed (album) by The Rolling Stones 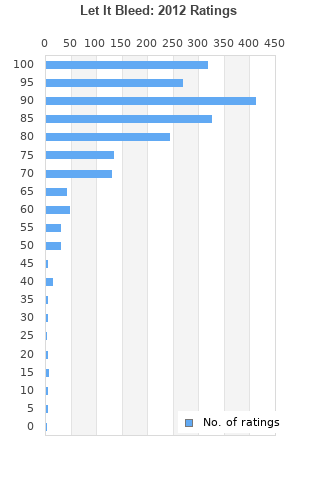 The Rolling Stones - Let It Bleed [DISC ONLY] (SACD)
Condition: Very Good
Time left: 2h 7m 41s
Ships to: Worldwide
£4.99
Go to store
Product prices and availability are accurate as of the date indicated and are subject to change. Any price and availability information displayed on the linked website at the time of purchase will apply to the purchase of this product.  See full search results on eBay

Let It Bleed is ranked 2nd best out of 87 albums by The Rolling Stones on BestEverAlbums.com.

The best album by The Rolling Stones is Exile On Main St. which is ranked number 42 in the list of all-time albums with a total rank score of 30,043. 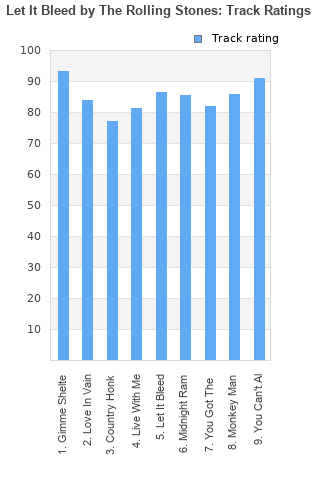 Rating metrics: Outliers can be removed when calculating a mean average to dampen the effects of ratings outside the normal distribution. This figure is provided as the trimmed mean. A high standard deviation can be legitimate, but can sometimes indicate 'gaming' is occurring. Consider a simplified example* of an item receiving ratings of 100, 50, & 0. The mean average rating would be 50. However, ratings of 55, 50 & 45 could also result in the same average. The second average might be more trusted because there is more consensus around a particular rating (a lower deviation).
(*In practice, some albums can have several thousand ratings)
This album is rated in the top 1% of all albums on BestEverAlbums.com. This album has a mean average rating of 85.0/100. The trimmed mean (excluding outliers) is 85.6/100. The standard deviation for this album is 14.1.

Beginning and end of this album are incredible, agree that the middle drags a bit

The opening track and the last 2 tracks are some of the finest ever put to plastic. The ones in the middle are also alright i guess.

This will probably be considered the stones best if you had to pick objectively. It’s not my personal favorite, but still it deserves its place here forever and ever. It defines the late 60’s.

Last Brian Jones album and my personal Stones favorite, amazing journey of songs from start to finish, maybe a little weak the center songs but overall an amazing albums that deserve top 50 all time at least

Not as phenomenal as Sticky Fingers, but very close. Tracks such as "Live With Me", "Midnight Rambler", and "Monkey Man" are classic Stones rockers, and "Gimme Shelter" and "You Can't Always Get What You Want" are brilliantly unique.

I am not a Stones fan at all, and mostly don't like their albums. Let It Bleed is the lone exception. This was amazing.

This was a shift in the Rolling Stones music. A great goodbye to the sixties. Undoubtedly, "You Can't Always Get What You Want" is one of their best songs, and is one of many songs on the album that cements their place in rock history.

Your feedback for Let It Bleed